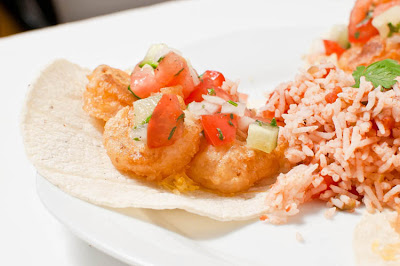 TGIF!  That's what I screamed when I woke up this morning.  Well, not literally, but just inside of my head.  But seriously.  Thank. Goodness. It's. Friday.

Definitely have a good weekend lined up.  It's the birthday weekend of a couple pharmacists I know, so we're going out for sushi tomorrow night.  Pretty amped about that because I could use a good meal of sushi right about now!

And I've decided to do something pretty cool here soon.  I've decided to kind of expand my "culinary abilities" and recreate dishes that I've had at restaurants.  I know... nothing new.  People do that all the time.  But I'm going to combine restaurant reviews and meals I've eaten and compare them to what I actually make at home.  Kind of like a side-by-side comparison of sorts.  Don't get it?  Well... the first post will be sometime in the next couple of weeks, and maybe it will be clearer then.

Anyway, this recipe was kind of an evolution of an idea really.  I had set out to make some shrimp ceviche, but then wanted tacos.  So shrimp ceviche tacos sounded pretty good.  Then I opened up the pantry and saw some tempura mix, and it was on.  Shrimp.  Tempura.  Tacos.  Oh yeah.

Oh, and don't forget this week's dessert poll at the end of the post!!

In a large bowl, combine shrimp and tempura batter.  (A lot of Asian markets cell tempura batter mix and it's pretty easy... mine was a "just add water" kind of thing and tastes pretty great)  And of course, you could always make up your own tempura mix, but I had the pre-made stuff handy, so that's what I used.  Let sit for about 3-5 minutes.

In a heavy, deep pan or pot, heat about 2 inches of vegetable oil.  You know it's hot enough when you add a little bit of the tempura batter and it sizzles.

Add shrimp and cook for about 1-2 minutes per side, or until the tempura is crispy and golden brown.

Transfer to a paper towel-lined bowl and sprinkle with a little bit of salt and pepper.

To assemble tacos, place a thin layer of shredded cheese on each tortilla, then add a few shrimp (about 3-4 per taco), and top with cucumber/tomato salsa.

We served the tacos with some rice (which I basically just cooked in the rice cooker and added about a 1/2-3/4 cup of salsa to and mixed). 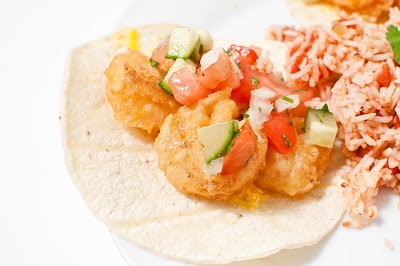 This made for a great impromptu taco.  The flavors were fresh and I loved the contrast of the fried tempura shrimp and the delicate salsa.  Definitely a winner in my book!

Have a great weekend guys!


And for the poll this week, I'm feeling like I want to make some cheesecake... so here's some flavors (don't know if some of them actually exist... but hey... I will make it happen if it wins!)