This past weekend was our first culinary lab of the quarter.  My group was assigned to do a Greek Salad and some Latkes (or fried potato pancakes).  And for this quarter, our lab is not only responsible for feeding ourselves, but also a few other labs (so about 60-80 people).

Our group of three was already one short, so there was just the two us.  We decided to each tackle one recipe and help eachother out in between.  I ended up with the latkes.  Now, any time you make something fried, ideally, it's best to serve right away.  Well, remember that whole 60-80 people that we were serving?  Practically impossible to fry up about 60 people's worth of latkes and keep them all perfect.  I know there are probably people that CAN do this, but for a second quarter culinary student?  I'm good, but not THAT good... yet.

What I'm getting at is, I got some voiced criticism from someone in one of the other labs that we were feeding.  "Those just don't look appetizing" was the comment, I believe.  You're going to get criticized no matter what setting you're in, so I take things like that with a grain of salt and learn from them.  I was really surprised when a couple of my classmates stepped up and said that the girl was really rude in the way she said it and stood up for me.  It was good to know that they had my back, and most of them even told me the latkes were great and that girl didn't know what she was talking about.  Either way, it felt good to be supported.

But after getting home, it really struck a nerve with me.  Maybe she was right, maybe they didn't look appetizing.  I was determined to come up with a latke that looked and tasted amazing.  And so, this trio of tuna dinner was born.

I must warn you, there are A LOT of pictures in this post.  But I figure, if I'm not posting as often, I might as well give you guys ample eye candy, right?

There seems to be a lot of ingredients up there, but I promise as long as you have everything in place and ready (a.k.a. mis en place), then it will come together in no time.  And it's an elegant meal, that is just too simple that it's fool proof!

So let's start with the latkes.  Make sure you have a bowl of salted cold water for your potatoes so that they don't oxidize and turn brown on you. 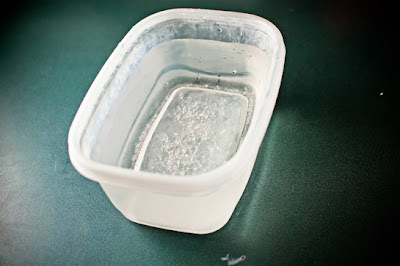 Then you'll take your star ingredients, the potato and the onion. 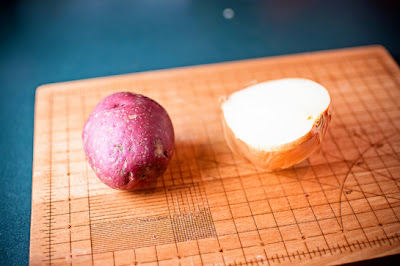 Peel your potato (or potatoes if you're using more than 1) and have a grater ready. 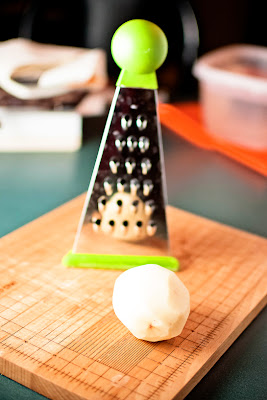 Shred that potato and immediately put into the bowl/container with cold salted water.  Set aside. 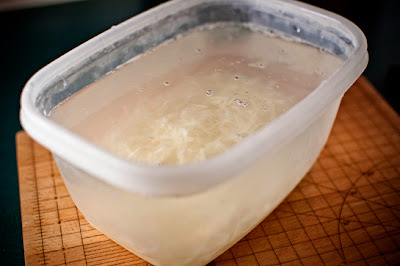 Then quickly small dice your onion and set that aside, as well. 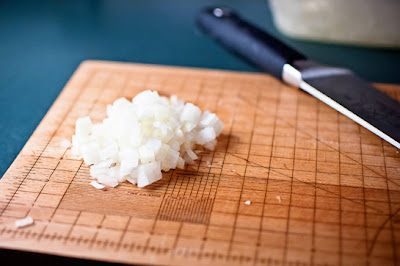 Moving on to the tuna... make sure to whip out a separate cutting board - we don't want any cross-contamination here!  And I can't stress this enough, make sure you get SUSHI-GRADE Tuna!  It's been processed in a way that it is "safe" from parasites and bacteria - however, you eat raw fish at your own risk.  If it's not labelled as "Sushi-Grade", then double check with your fish monger for sure!

Get a large bowl and fill it with ice.  Then you'll want to cut the skin off of the Ahi.  With a boning knife, carefully cut away the outer skin.  Then from the wider side (the left in the picture), but out two 1 to 1 & 1/2 inch wide portions for your Sesame Encrusted Ahi.  Wrap in plastic wrap and place over ice.

Then with remaining Ahi, dice into small 1/4 inch cubes.  Place in a small bowl and drizzle with Sriracha and a dash of sesame oil.  You can make it as spicy as you like, so be liberal with the Sriracha.  Mix well and chill until ready to use.

Let's move on to our vegetables.

Fill a medium pot half way with water and bring to a rolling simmer.  Have a medium bowl of ice water ready as well.

Blanch the asparagus in the water for about a minute and quickly shock in the ice water (to stop the cooking process).  This will give the asparagus a vibrant green color, as well as keeping it's tender crunch.  Don't worry about blanching your zucchini (unless you really want to)... I rather like the taste of raw zucchini, just make sure you wash it well before you slice it.  Your vegetables should look like this. 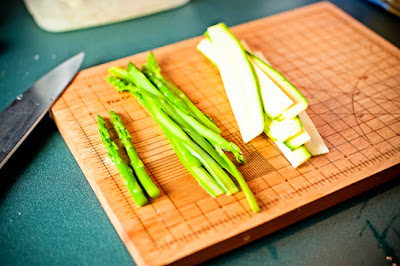 Then go ahead and get your breading for your ahi portions ready.  In a small container, combine the breadcrumbs and black sesame seeds.  Season with salt and pepper, to taste.  Set aside. 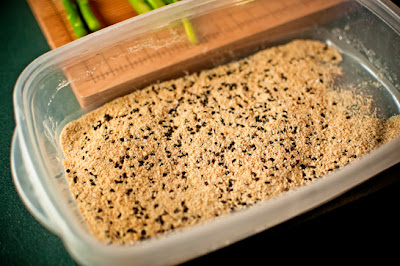 Now let's make our sauce for the Ahi.  Place the soy sauce, sliced strawberries, water, and sugar in a small saucepan and bring to a boil.  Reduce the mixture by half, or until thickened to desired consistency.  Puree mixture then strain through a fine mesh strainer or chinoise.  Set aside. 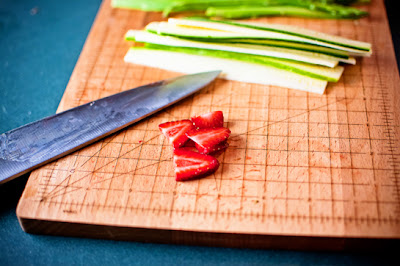 Unwrap Ahi portions and roll in the breading until fully coated. 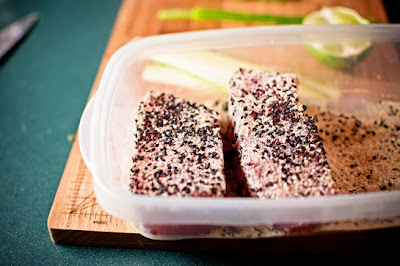 In a medium heavy-bottomed pan, add enough vegetable oil to cover the pan by 1/2 an inch and heat under medium high heat.

Drain potatoes from water and squeeze out and excess water retained by the potatoes.  Pat dry with paper towels.

In a small bowl, combine the shredded potatoes, onions, egg, baking powder, and flour.  Season with salt and pepper.  Mix well.  Honestly, I probably could have used a little more potato or a little less egg - it was very egg-y.  But tasty, nonetheless. 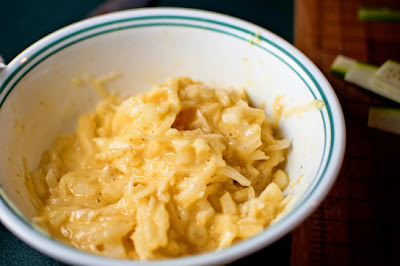 Fry the latkes in the oil until crispy and golden brown, about 2-3 minutes per side.  Let drain on a paper towel-lined plate.  Then, using the open end of a drinking class (or the reasonable option would be to use a cookie cutter), cut a nice even circle out of the latke.  Then eat the edges, because they're delicious.  But don't spoil your dinner. 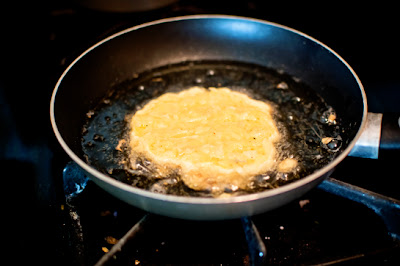 Let's saute our Ahi portions now.  Heat a medium skillet under medium high heat and add about a tablespoon of olive oil.

Add Ahi and cook each side for about 30-45 seconds, just to sear slightly and get a nice golden brown crust.  Place on cutting board and slice into 1/4 inch pieces. 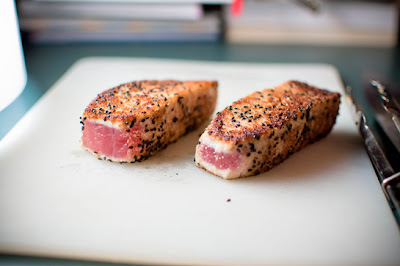 Remember those pounded out tuna cubes?  Unwrap them and get one of your blanched pieces of asparagus.  Wrap the asaragus with the tuna and place them seam side down on the plate.  Drizzle with a little bit of lime juice and lightly sprinkle some salt over top. 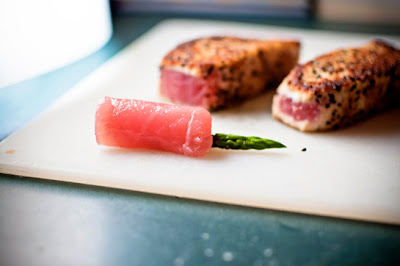 Then we'll plate the sliced Ahi.  Place a few pieces of the thinly shaves asparagus and zucchini the plate.  You can be playful with it, they're flexible, but just make a little "nest" if you can.  Drizzle the vegetables with some lime juice and sprinkle with a tiny pinch of salt.  Place the slices Ahi over top and drizzle with Strawberry Soy Sauce. 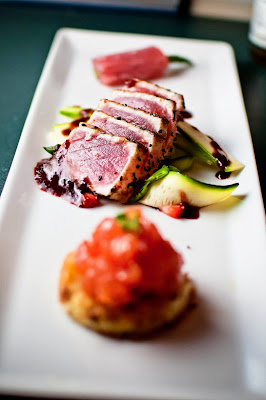 Then get your tartare from the fridge.  Place the crisp latke on the plate as your final component.  Top with a heaping mound of spicy tuna tartare.  Garnish with a couple pieces of sliced scallion. 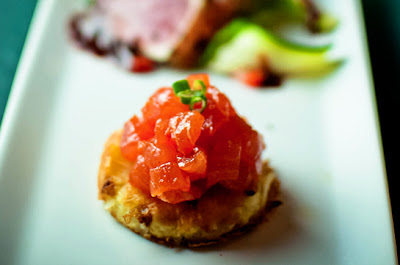 And voila!  An elegant dish, but after broken down into steps, really isn't that complicated!  And although the latke wasn't the star, it was definitely a unique component to the dish.  And if I didn't make it look appealing in this, then I might as well give up!  But I think I did a pretty good job, don't you think?  =) 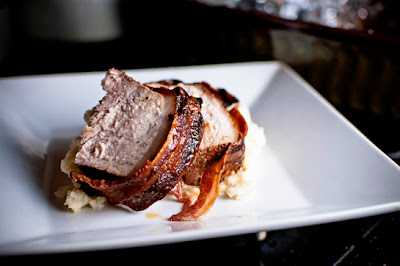 Yes, I'm still alive.  I may look like a zombie, but I'm still here!

The two week break between quarters was seriously just what this girl needed.  I thought I would have a post up before the new year, but I took time to relax instead.  Priorities, I tell ya.

And I'm proud to report that after the first quarter of culinary school, this girl has a solid 4.0.  Woop woop!  Right?!

Anyway, next quarter starts tomorrow and I'm ready for it.  Purchasing, Sanitation, and Culinary Theory Lab Part 2 here I come!

I thought I'd start 2012 off with a bang and give ya something juicy, mouth-watering, and simple as can be.  Pork-wrapped pork.  Mmmm hmmm.

Ingredients:
Adapted from The Comfort of Cooking's Recipe

Why bone-in?  Honestly, I think more flavor develops with a bone-in anything.  Yeah, it may have to cook a tad bit longer, but flavor outweighs times in my book (this coming from a girl who swears she has no time to spare!).

So let's line a roasting pan with aluminum foil and place your big hunk of pork on that sucker.  Preheat your oven to 375F. 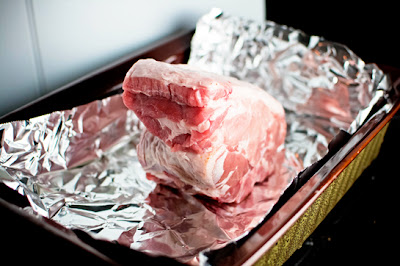 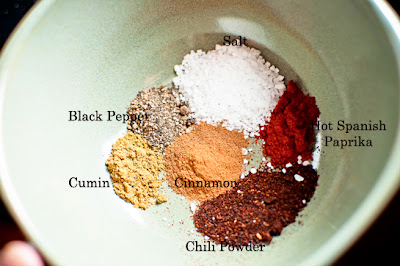 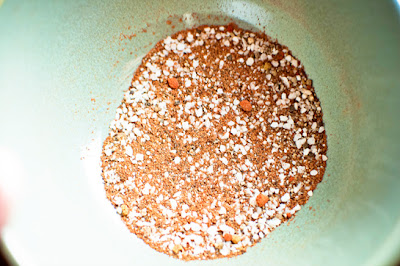 And give that pork a good rub down. 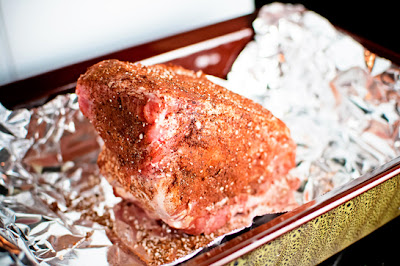 Then we'll wrap the whole thing in some bacon.  P.S. - the technical term for wrapping something in fat (in this case, bacon) is "barding." 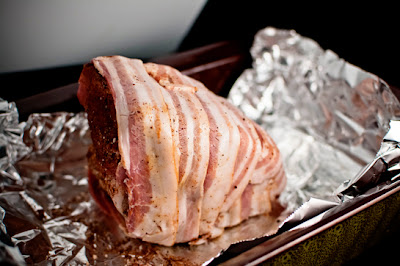 Place the roast in the oven and roast for about 50-60 minutes.

Meanwhile,  in a small saucepan under medium heat, combine the ingredients for the glaze - the brown sugar, flour, cider vinegar, and mustard powder. 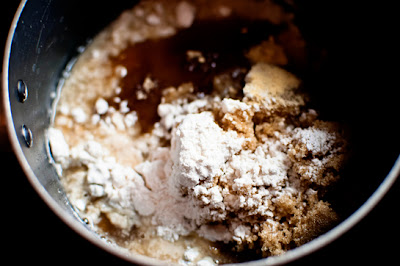 Simmer until the sugar is dissolved. 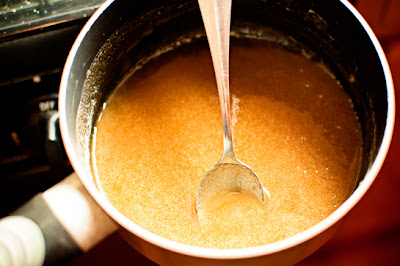 Drizzle glaze over top of pork roast and continue to roast for about 25-35 minutes longer, or until internal temperature has reached 160F. 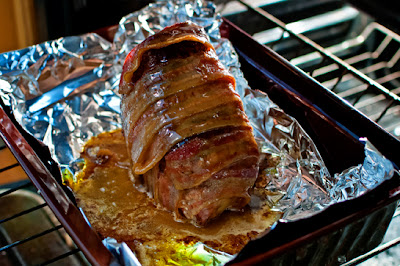 The bacon will be nice and crispy! 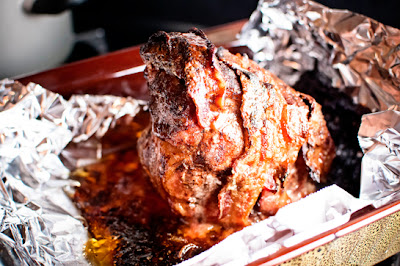 Let rest for about 10 minutes and then slice into 1 inch thick portions.  Serve with your starch of choice and enjoy!


I want to thank you guys for sticking with me, even though I've been M.I.A.  I do my best to balance everything, but certain things take precedence before the blog.  I appreciate you all, and again, thank you so much!