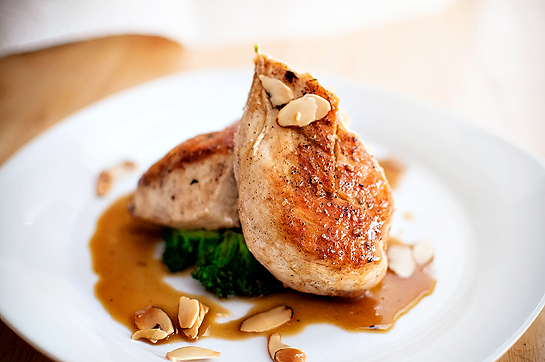 How was everyone's?  Ours has been pretty boring.  Work and school.  Work and school.  I had yesterday and today off of work so we've been keeping pretty busy.  We ended up carving our pumpkins last night - I did a Grim Reaper and it was AWESOME!  Don't know what we'll end up doing tonight, but I wouldn't complain if we just snuggled up on the couch and watched a Netflix movie!

Anyway, this is another simple meal!  And it's healthy, to boot!  Sauces can be as complex or as simple as you make them.  This dish utilizes the simplest of all sauces.  A pan reduction.  That's basically taking the little bits left over in a pan (fond) from sauteing a piece of meat and deglazing the pan with liquid.  In our case, wine and chicken stock.  Then reducing that liquid until it's thick, and then we mount it with butter to get a sheen and added flavor.  Easy enough, right?! Right.

First, we'll fortify our chicken stock.  You don't necessarily have to do this, but I feel it adds more flavor to those store-bought chicken stocks that always seem so bland.

In a large saucepan, combine the chicken stock, onion, carrot, celery, white wine, parsley stems, bay leaf, and thyme.  Simmer for about 30 minutes, then strain, discarding the solids.  Don't worry about seasoning it with salt and pepper, because we'll do that after it's reduced.  If you do it now, you'll end up intensifying the salt flavor when you reduce it and it'll end up being overkill in the end.

Heat the oil in a large saute pan under medium high heat.  Season chicken breasts with salt and pepper.  Add to pan and cook until golden brown on both sides and white throughout.  Transfer to a plate, cover, and let rest while you make your sauce.

Deglaze the saute pan with your fortified stock, scraping up the little pieces stuck to the bottom.  Reduce by at least half, then mount with the butter.  Season with salt and pepper, to taste. 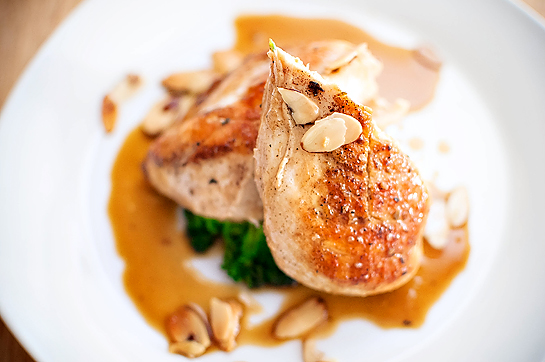 To plate, place about 1/2 cup of broccoli crowns in center of plate. Top with chicken breast (you can cut it in half like I did if your chicken breast is too big).  Drizzle sauce on top of chicken and around plate.  Voila!  Dinner time!

Hope you all have a great weekend!