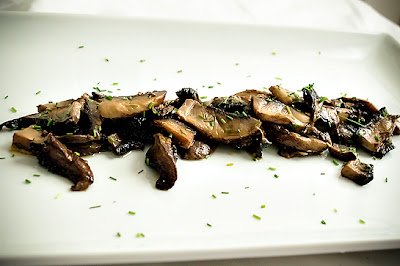 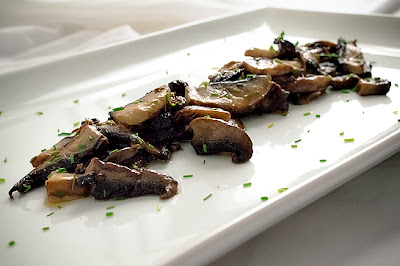 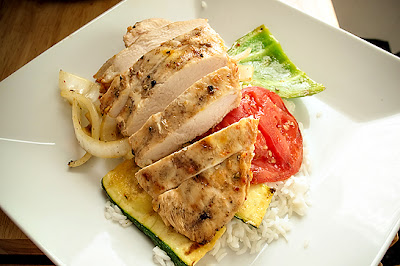 Middle Eastern cuisine and I don't really have a great relationship.  Not because I don't like or prefer it, but I just never am exposed to enough of it.  Sure, I've been to a couple Persian places around town, but I mean, I live in Kentucky.  There's not a huge Persian presence, and the restaurants that do offer this type of food, in my opinion, don't do it very well.  (Or in any special way to make me want to come back again and again).

Anyway, I stumbled upon a basic recipe for Joojeh Chicken - which is usually served in kabab form, but decided to forgo the sticks with this one and just use the marinade.

The marinade seems simple, just a few staple ingredients (except the saffron, but it's worth the expense) - but they meld together to produce a complex and delicious flavor!

Add chicken breasts and marinate for at least 3-4 hours.

Heat a grill to medium high heat.  Oil the grill grates or spray with pan-spray to prevent sticking and to get good marks.

Add chicken to grill and cook until white throughout.  You can also grill your desired vegetables at the same time.

Let the chicken rest for about 5 minutes and slice.  Serve with grilled vegetables and rice. 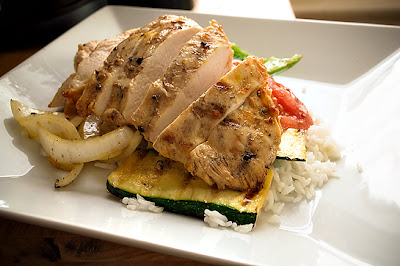 Well, I'm off to my volleyball tournament (last time playing with the team I've been playing with for the past 6 years!  Sad to say I'm leaving this team, but the new team I'll be playing on is just as fun!)  Wish us luck - trying for best of the worst (we're in the losers bracket, hehe!)  Have a great rest of the week, guys!
Posted by Peggy G. at 1:37 PM 4 comments: 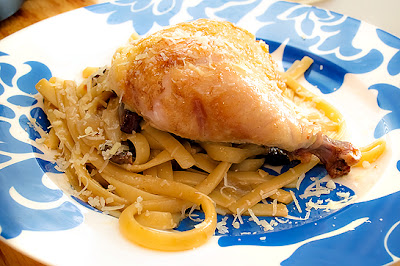 For those of you in the U.S., tomorrow is July 4th.  A day off from the monotonous work week and a day of remembering our Independence.  Cookouts will be in full force all over the country.  And of course, we cannot forget the fireworks!

Andy and I don't really have concrete plans, we'll probably fly by the seat of our pants and do whatever comes our way.  Free concert and fireworks by the Waterfront?  Maybe.  Grill out at home?  Maybe.  Hang out with a bunch of friends?  Maybe.  Who knows... maybe none of those things will happen, but I'll be sure to give a report of what does the next time I post!

Roasted chicken is one of my guilty pleasures.  It takes at least an hour... more than that if you're willing to put your chicken through a brine - which is oh, so necessary, in my opinion.  The crisp, succulent skin, and the juicy meat is all it takes to put me in a blissful food mood.

I had some heirloom tomatoes and mushrooms, so I just threw together a quick pasta to serve with the chicken.  It was quite tasty, and definitely hit the spot!

Chicken Brine:
I always use this trusty quick brine from Michael Ruhlman

If you don't want to brine your chicken, you can definitely skip that step, but I promise you it'll be so much more flavorful if you take the time to do it!

After the chicken has been brined, pat it dry and carefully place butter underneath skin of chicken.  Season the skin with salt and pepper.

Truss the chicken and place on a roasting rack, breast side up.  Place in oven and cook for about 15-20 minutes or until skin starts to become golden brown.  Turn oven temperature down to 375 F and carefully flip bird so that it is breast-side down.

Continue to cook until the chicken reaches 155-160 F.  Let rest for about 5-10 minutes, or until internal temperature reaches 165 and juices run clear.

Prepare the fettuccine according to package directions.

Deglaze the pan with the Madeira and chicken stock.  Bring to a boil then reduce to a simmer until liquid is reduced by half.  Mount the sauce with a couple tablespoons of butter and season to taste.

Toss the sauce in with the fettuccine and serve with roasted chicken. 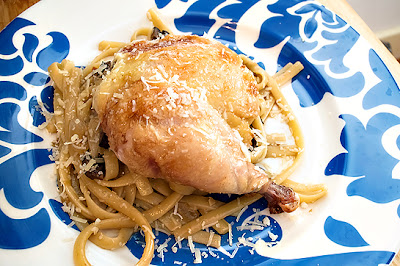