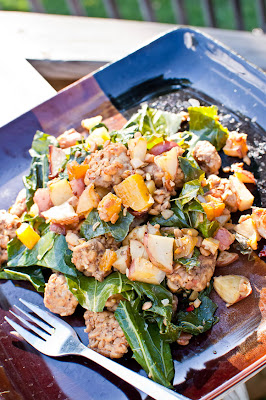 I'm happy to say that this Tuesday morning started off a lot better than yesterday's dog fiasco.  The only thing wrong with today (so far) is that Andy happened to take my keys with him to work!  But I didn't have to work today, so it wasn't like I needed them for anything.  And it gives us an excuse to have lunch together so he can give me my keys back.  So win-win if you ask me =)

Anyway, we've been trying to eat a little bit healthier around these parts, but still wanting to get our protein in.  Tofu really isn't an option right now for us, I'm still quite unsure about it - I know, I know - it takes on the flavor you put it in and all that jazz, and eventually I'll get over this hump, but right now, we're both on the fence about tofu.

I've been hearing a lot of good things about tempeh - which can best be described as a soybean cake, so I figured we could safely give that a try!  Whole Foods had a couple different varieties, so we opted for 2 packs of Vegetable Blend Tempeh.  Andy was still a little leary about it, but I told him to trust me on this one! 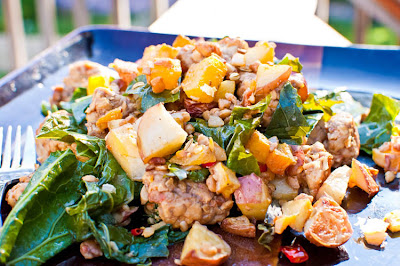 Line a baking sheet with aluminum foil and spread beets and potatoes on sheet in a single layer.  Season beets and potatoes with salt and pepper.  Toss with 1 tablespoon of olive oil and bake for about 25 minutes, or until potatoes are golden brown.

Meanwhile, bring a large pot of salted water to a boil and add collard greens and kale.  Simmer for about 8-10 minutes.  Drain greens and set aside.

Crumble up the tempeh into 1/2 inch pieces and place in a large skillet under medium high heat.  Add 1 cup of water, soy sauce, and lemon juice.  Cover and bring mixture to a boil.  Simmer for about 10 minutes, stirring occasionally until most of the liquid is gone.

Stir in cilantro, fennel seed, and greens.  Cook for 10 more minutes before mixing in beets and potatoes.  Cook until heated through, about 2-3 minutes and serve!  Top with your favorite barbecue sauce, if desired.

This meal exceeded every expectation in my book.  The only thing Andy thought was somewhat off about it was the beets, but he's not as big of a fan of beets as I am, so that's completely understandable.  But he actually liked the tempeh!  So that's a win in my book. 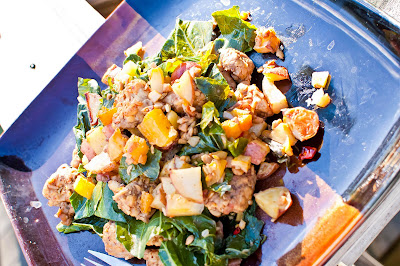 This definitely won't be the last time I ever try tempeh, it's my vegetarian protein of choice as of right now =)

Have you guys tried tempeh?  What's your favorite way to have it?