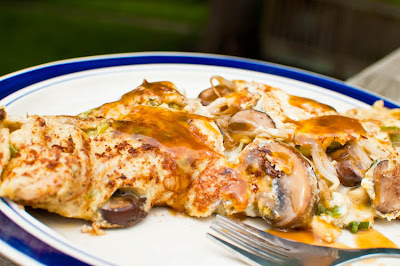 So after a recent trip to Happy China - just your run-of-the-mill take-out Chinese place, I decided to stray from the ordinary, and delve into some Egg Foo Young.

This was my first experience with Egg Foo Young, so I really had no idea what to expect.  After getting the take-out home, I discovered that it was pretty much just an amped-up omelette with a special "gravy".  It was tasty though, a little greasy, but maybe it was supposed to be that way?  I don't know.

Anyway, for breakfast/brunch yesterday, I decided to tackle Egg Foo Young at home.  The result was something much less greasy, and with tons more flavor! 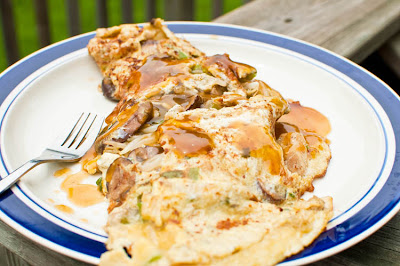 In a large skillet under medium high heat, add vegetable oil and heat until shimmering.  Season chicken with salt and pepper and add to skillet.  Cook until white throughout, about 5-7 minutes.  Remove from pan with a slotted spoon and set aside in a large bowl.

Adding more oil if necessary, add ginger, green onions, bean sprouts, mushrooms, and green peppers to skillet.  Saute for about 6-8 minutes, or until vegetables start to soften.  Season with salt and pepper.
Add vegetables to large bowl with the chicken.

Pour eggs into bowl with vegetables and chicken, and combine.

Heat a non-stick skillet under medium high heat, adding about a tablespoon of oil.  Add about half of the egg mixture to the pan and cook for about 3-5 minutes or until eggs have solidified.  Carefully fold half of the mixture over (like an omelet) and cook for an additional minute or 2, or until cooked throughout.

For the sauce, combine chicken broth, soy sauce, vinegar, and sugar in a small saucepan.  Bring mixture to a boil.

Make a slurry with the cold water and cornstarch.  As soon as the chicken broth mixture is at a boil, at the cornstarch slurry.  Heat for about 1-2 minutes, or until mixture thickens.  Pour gravy over eggs.

This was definitely delicious.  We had 2 huge Egg Foo Youngs and we both only ate half of it.  Not that we didn't like it, but we were just so full!  These things seriously pack a lot of stuff in!  Feel free to vary up the toppings, just like an ordinary omelette - but it's really the sauce that makes these special! 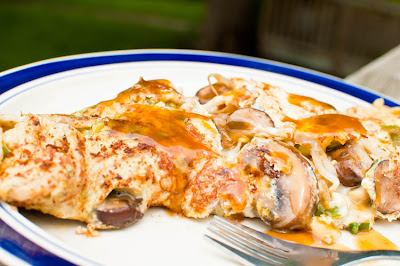 Have a great Tuesday guys, and see you all tomorrow!
Posted by Peggy G. at 4:22 PM