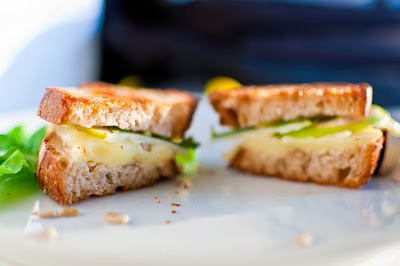 It's that time again!  Secret Recipe Club time!  Last month was my first time and I had so much fun so I knew I had to join again for another round!

What is the Secret Recipe Club, you ask?  It's basically a secret Santa for food bloggers!  The brainchild of Amanda from Amanda's Cookin' - bloggers sign up to get a "secret" blogger from whom we choose to make a recipe from their blog and post on a designated day!  I think my favorite part is seeing what others do with my own recipe!  Last month, Dana from Food For Thought made an awesome rendition of my Coffee Ice Cream Pie by turning it into a Cookies & Cream Ice Cream Pie!  So I can't wait to see what whoever has me this month does with something else of mine!

So let's get to it!  My secret blogger this month was Sara from Cupcake Muffin.  I'd never checked out her blog before, and my first thought was - Cupcake Muffin - Andy's going to reap the benefits of this one!  Although there are tons of sweet treats on Cupcake Muffin, there are also many delicious savory dishes as well!  It's pretty much an all-around blog with tons of great stuff!

Something that really caught my eye was the recipe for Pear and Goat Cheese Sandwiches.  It has been extremely hot here, so the last thing I've wanted to do was actually cook something or turn on the oven/stove.  Sara says it best in this post when she says that these are so simple, but so gourmet!

But during my shopping trip, I couldn't find good looking pears anywhere!  So I opted for apples and switched out the goat cheese for Brie.  I mean, I love me some goat cheese, but Andy's a little picky about that one for some reason.  So I got some Brie - which is also creamy and crowd pleasing.  And everyone knows that Brie is best melted - so I had to turn this sandwich into a grilled cheese! 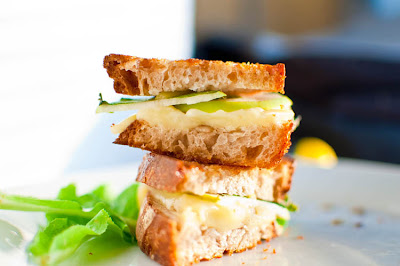 Sprinkle the lettuce leaves with a little bit of apple cider vinegar and toss.

Melt 1 tablespoon of butter in a medium skillet under medium high heat.  Add one piece of sourdough bread (kind of swirling the bottom of the slice in the melted butter to coat) and top with one or two lettuce leaves.  Then add 3-4 slices of apples.  Layer on desired amount of Brie and sprinkle top with pumpkin seeds and cinnamon.  Top with slice of sourdough.

Once bottom is golden brown, carefully flip sandwich over (adding more butter to the pan if needed - and swirling again to get butter on 2nd slice).  Cook for another 2-3 minutes, or until golden brown on other side.

Simple as that!  Not much cooking at all, just basically some quick melting of the cheese and toasting of the bread.  This was probably one of the best sandwiches I've ever had, and could have never happened if I wasn't inspired by Cupcake Muffin's sandwich (which I will definitely be trying once I find some decent pears!). 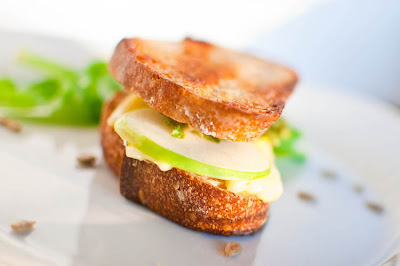 Want to join the Secret Recipe Club?!  You should!  Click here to find out more and don't forget to check out what all the other SRC participants did this month!