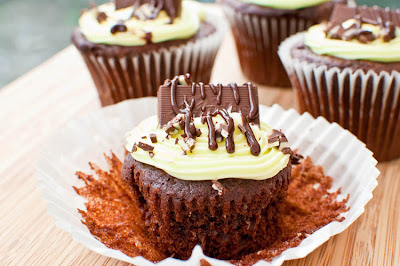 Okay, so these weren't the winner of last Friday's poll... but seriously.  I just had to make them.  I mean, Andy.  Andes Mint.  They were meant to be.  Right?  So don't fret, the winner of the poll was something "bourbon-flavored" - and it will come soon enough.  But right now, we're talking about these cupcakes.

They were so good.  They flew like hot cakes.  Andy probably ate 6 in the matter of two days.  Which he probably shouldn't have since he has a tux-fitting coming up this Saturday... but I digress.

Anyway, it's late, so I won't jibber-jabber any longer.  Plus, I have to get up early, so I should be heading to bed!  So without further ado...

Ingredients:
Adapted from Your Cup of Cake's recipe 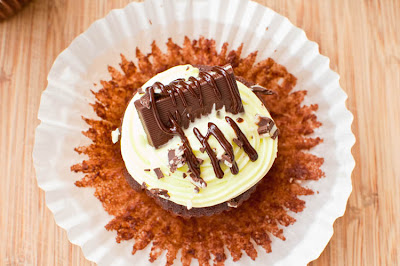 Preheat oven to 350 degrees and line cupcake pans with liners.

For the cupcakes: In a medium bowl, mix sour cream, oil and vanilla extract together.  Add eggs, one at a time, stirring well in between each addition.

3.    Alternate adding the cake mix and liquids (buttermilk and water), starting and ending with the cake mix.
4.    Fill liners 2/3 full and bake for 16-18 minutes, or until a toothpick comes out clean.  Place on a cooling rack to cool slightly.
5.    Chocolate Mint Filling:  Melt chocolate chips, 5 Andes mints, and heavy cream together in the microwave in 30 second intervals.  Mine melted quickly, no more than 1 minute.
6.   Place filling in a squeeze bottle and insert into middle of cupcakes, filling with desired amount (about 1-2 teaspoons per cupcake).
Green Buttercream:  Beat cream cheese and butter until light and fluffy.  Add powdered sugar, heavy cream beat well.  Add a few drops of green food coloring (I think I did about 8-10) and stir well.
8.   Pipe buttercream onto cooled cupcakes and top with extra Chocolate Mint Filling and an Andes Mint. 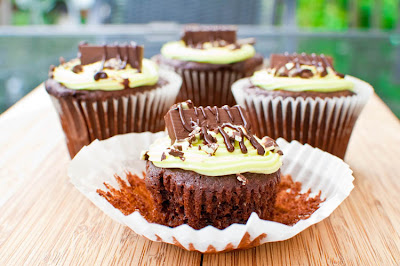 So silly me couldn't find any peppermint extract anywhere this weekend.  So I kind of improvised on this one - I'm sure it would have been extra special with the added mint flavor, but we didn't seem to mind =)  I mean, seriously - look how happy Andy is! 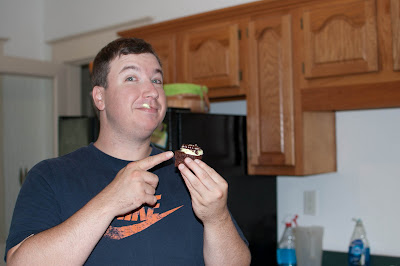 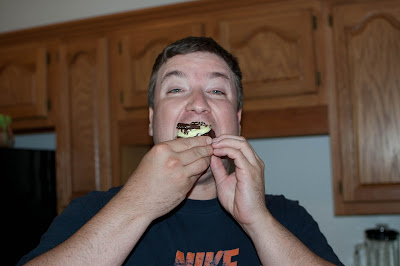 Have a great (what's left of) Wednesday guys!  And don't forget that the CSA round up is tomorrow, so there's still time to send me your local produce pictures @ mtlabor85@yahoo.com!  I'll post it sometime tomorrow afternoon (maybe evening because I have a softball game at 6:30).  See you guys tomorrow!