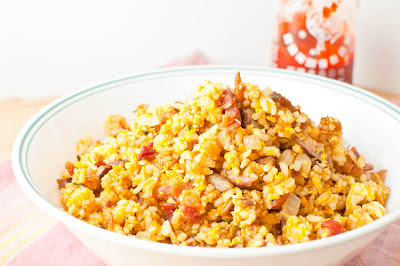 Happy Friday guys!  I am so elated that it's rearing up to be the weekend, that it's not even funny.  We've got a pretty jam-packed weekend planned, actually.

Tomorrow morning is the Derby Marathon & Mini.  And no.  My butt is not running in it.  I'm not that in shape yet.  I'll actually be volunteering at one of the Powerade and water stations (mile marker 10/19 for those of you that are actually running!).  The only bad thing about this is... I have to be there at 6:15am.  SIX. FIFTEEN. In the morning.  On a Saturday.  Yeah.  I'm dedicated to giving the runners their fluids. 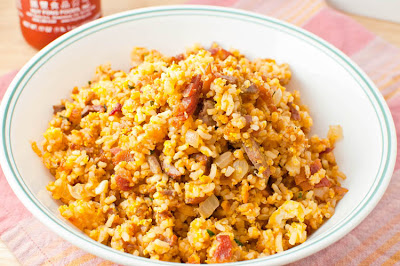 But it won't be so bad.  I've been on a volunteering kick lately, so it'll be good to get out there and do some good.  (And I get a free t-shirt, so that's always a plus!)

And there's also a free concert (that was supposed to be by the river, but considering Waterfront Park looks pretty much like Atlantis right now, I'm positive that they'll be relocating that) on Saturday night that we plan on going to with a couple friends.  The band?  Soul Asylum.  Yeah, anybody remember that early 90's band?  Most famous for that song "Runaway Train".  Yeah, I was 7 when that came out, so no, I don't really remember that band... but since Andy is a tad bit older than I am, he remembers them clearly.  Which is also funny because he can't ever remember to take out the trash on Mondays, but yet, remembers a band from ages ago.  But I digress. 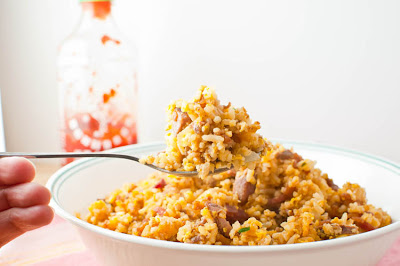 Anyway, let's talk fried rice.  Fried rice is one of those things that I believe my mom can make the best.  She always just added in whatever we had laying around the house, and it was always amazing.  Definitely great for dinner all on it's own.  But I'm not bragging.

What I will be bragging about, is this new recipe for fried rice that may give my mom's many versions a run for her money.  It's spicy, it's filling, it's absolutely delicious.  So go ahead, try it out - you won't be disappointed! 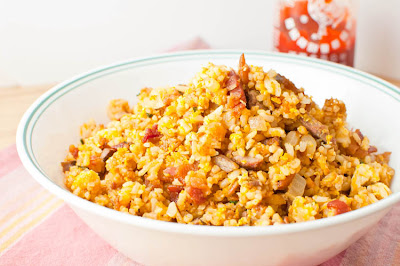 In a medium bowl, mix leftover rice with the melted butter and set aside.

In a small bowl, mix together Sriracha, sugar, and hot water.  Set aside.

In a large skillet under medium high heat, fry up the bacon pieces until browned and crisp, about 6-8 minutes.  Remove with a slotted spoon and transfer to a paper towel-lined plate.  Set aside.

Drain pan of the bacon fat, leaving about 1-2 tablespoons still in the pan.  Add the diced onions and cook until softened, about 5 minutes.

Stir in garlic and half of the scallions.  Saute for about a minute more.

Add rice to the pan and pour Sriracha mixture over top.  Mix well.  Stir fry for about 3-5 minutes, or until rice is started to "crisp" or brown.

Crack the eggs over the rice and stir to scramble throughout mixture.  Cook for an additional 2-3 minutes, stirring often.

Stir in bacon pieces and chorizo.

Season mixture with soy sauce, I think I used maybe 2-3 tablespoons and it was perfect.

Stir in sesame oil and remaining scallions.  Serve hot and with extra Sriracha if you'd like! 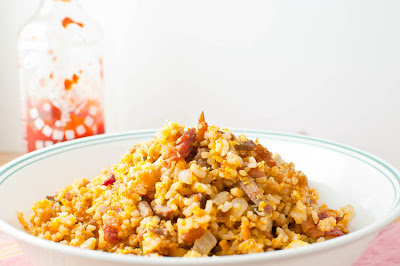 This was seriously delicious.  We had this with some Red Curry Chicken Wings (recipe soon to come!) and it couldn't have been a better meal.  The best part?  We had a good amount of leftovers, and after making this on Tuesday, they're practically almost gone.  It's almost bittersweet... but then again, I could always just make some more! 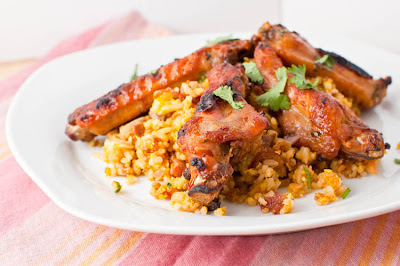 How do you guys fix your fried rice?  Leftovers are always useful!

Hope you all have a great weekend and look forward to a new recipe on Monday!
Posted by Peggy G. at 7:35 AM