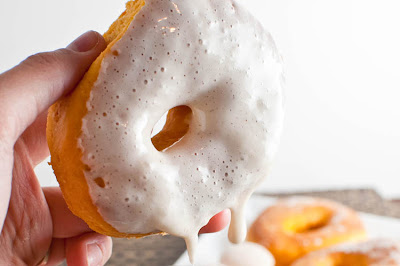 Well, you guys sure do like Chocolate Cake don't you?!  I hear you people, and I have no idea why I didn't just make it into a post, but the recipe I used for the chocolate cake is from the blog Foodess - recipe titled "Moist Chocolate Cake".  And it ain't no lie!  I pretty much followed that one to a tee (I made it into a rectangle cake, instead of a circular one), so it's no-fail.  I was a little worried, because you add the hot coffee at the end and it made the batter look like a big mud puddle (but I think that's what makes this cake so moist, so don't fret!).  I also used this Buttercream Frosting recipe from Wilton.com, and the only change I made was to only use 2 cups of powdered sugar instead of 4 (I just have trouble using that much sugar sometimes) and it made just enough frosting to frost the whole cake.

Anyway, to today's recipe (which won the poll from a couple weeks ago) is Sweet Potato Donuts.  Seriously, these are a must try.  And to have it with the cinnamon marshmallow cream just puts them over the top!  A-d-d-i-c-t-i-n-g.

Don't forget to vote for the new poll (which I'll try not to be too late on, again) down below! 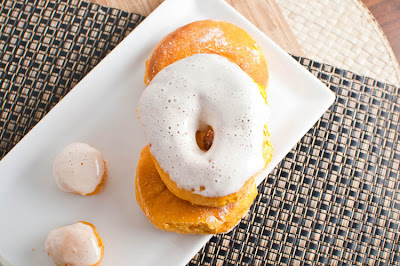 Prick your sweet potato all over with a fork and cook in the microwave for 10 minutes, or until softened.  Let cool to room temperature and carefully peel.

Place sweet potato in a high rimmed bowl and puree with an immersion blender (or an actual blender - but I was going for getting less contraptions dirty) until smooth.  I had about 1 & 1/2 cups of puree.

In a small skillet, brown butter under medium high heat until nutty in flavor, about 5-6 minutes. 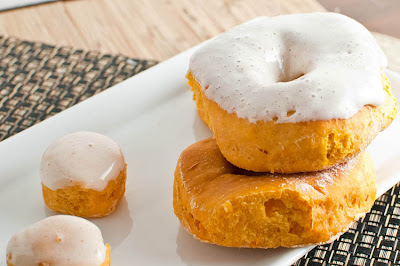 Scrape butter and any solids into a medium sized bowl and let cool.

Using the same skillet used for butter, add milk and heat until it is just warm (about 105 F).  Pour milk into a large bowl and add yeast.  Let sit for about 5 minutes.  Slowly mix in white sugar, dark brown sugar, salt, vanilla seeds, nutmeg, and bourbon.  Stir in sweet potato puree, browned butter & solids, egg, and egg yolks.  Beat mixture until combined.  Add the flour and beat at a medium speed (I used a wooden spoon for this - nothing like an old-fashioned workout) until pliable dough forms.  I think I added about 1 to 1 & 1/2 more cups of flour to get the desired dough consistency for mine (but I think this all depends on how big your actual sweet potato is, and how much puree you end up with).  Knead dough for a few minutes and place in a greased bowl.  Cover and let rise for about 1 hour. 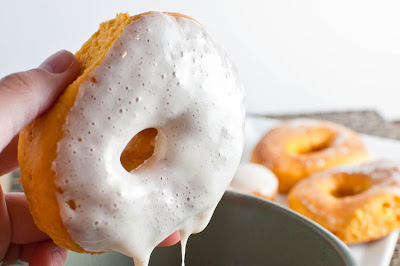 Punch down the dough and let sit for about 5 minutes.  On a lightly floured surface, roll out the dough to about 1/2 inch thickness.  Use a floured rim of a glass (or round cookie cutters) and cut out as many rounds as you can.  Use a smaller round cookie cutter (or in my case, the bourbon cap) to cut out the centers of the donuts for donut holes.  Nothing goes to waste here!  Roll out dough one or two more times to cut out as many donuts as possible.  I think I ended up with a little over 2 dozen.

Preheat oven to 400 F and place oven racks in upper and lower thirds of oven.  Bake the donut holes for about 10 minutes, and the donuts for 20 minutes, or until risen and golden.  You can have the holes and donuts on the same sheet, just remember to remove the donut holes first.  Let donuts cool to room temperature before dipping in cream. 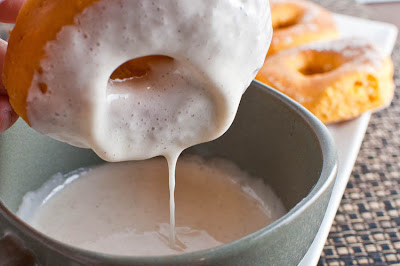 To make the marshmallow cream, heat a small saucepan under medium low to medium heat.  Add marshmallows, heavy cream, and cinnamon.  Stir slowly until marshmallows have melted.  You can add more cream if you want a thinner sauce.

Dip the donuts in cream and let any excess drip off (into your mouth, if you wish).

The original recipe had a cinnamon sugar topping, which is all well and fine, but seriously, the marshmallow cream here is where it's at.  There's a restaurant here in Louisville, the Village Anchor, that serves sweet potato fries with this cream (I was lucky enough to obtain this VERY simple recipe from our waiter last time we were there), and I just thought it would be perfect for these donuts!  I could really just drink that cream by itself, it's that good.

I love that these donuts were baked, instead of fried, too.  It makes them actually somewhat healthy, right?  They were absolutely delicious, unique, and perfect with a cup of coffee!