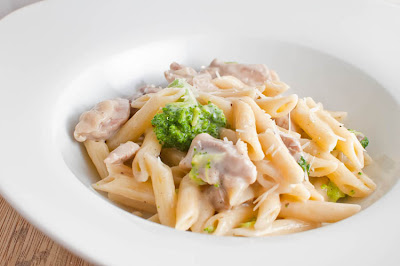 How was everyone's weekend?!  Ours was pretty good.  Well.  Besides the fact that we froze our butts off on Saturday.  Seriously, 40F?! 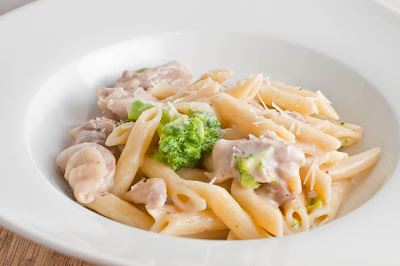 And I know what you're thinking, if it was so cold, why were you outside Peggy?  Well, it was Thunder Over Louisville this past Saturday.  What exactly is that?  Well, it's one of the biggest fireworks shows in the United States and the masses gather outside for an all day event (tons of street food, an air show, a Bats baseball game, FIREWORKS, etc.).  It's definitely great people-watching material.  Seriously... the people of Kentucky really come out.  We won't get too into it, but just sayin'.  Entertainment is everywhere.

I took a video of the fireworks finale (it's kind of shaky because I was FREEZING) but I'll post it tomorrow to give you guys a taste of what the fireworks are like.

Anyway, about this meal.  I remember when I was a kid, my mom would make "alfredo" using a can of Campbell's Cream of (insert whatever you want here: chicken, mushroom, celery, etc.)  Not an authentic "alfredo" by any means, but I think most moms took this shortcut every now and then.  Am I right?

So I decided to bust this out to remember what this was like.  And I made a few changes, just to jazz it up and it came out pretty tasty.  I definitely prefer an actual homemade alfredo to this, but it's definitely a quick fix that hits the spot in a hurry! 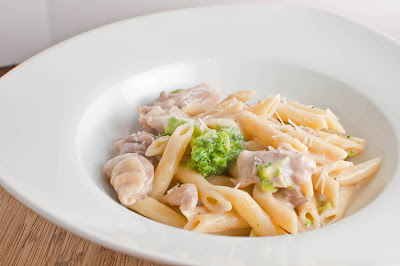 12 oz. package of penne pasta
1 large broccoli head, chopped
2 tablespoons unsalted butter
1 lb. of chicken (you could really use any part here, breasts, thighs, drumsticks - I had drumsticks in the freezer so I just skinned and boned them, and then cut them into cubes), cut into cubes/strips
10 & 3/4 oz. can of Cream of Mushroom soup
1/2 cup milk
1/2 cup shredded Parmesan cheese
salt and pepper, to taste
1/4 teaspoon cayenne pepper

Bring a large pot of salted water to a boil and cook pasta according to package directions.  Mine took about 10-12 minutes for a nice al dente.  Add broccoli to pasta during last 4-5 minutes of boiling.  Drain pasta and broccoli well and return to pot.

In a large skillet, melt butter under medium high heat.  Add chicken pieces and cook until browned and cooked through, about 10 to 15 minutes (depending on the chicken part that you use).

Mix in soup, milk, parmesan, and cayenne.  Season mixture with salt and pepper, to taste.

Pour mixture into pot with penne and broccoli and bring mixture to a boil, about 2-3 minutes, stirring occasionally.

See... easy right?  It's good for a quick meal.  I'm not ashamed to use those condensed soups.  I mean, there's just some things from childhood you just can't give up, right? 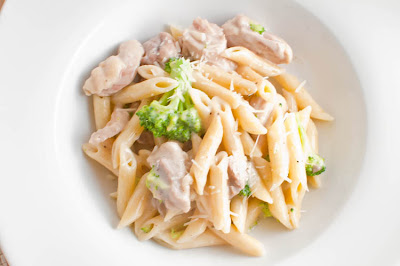 Have a great Monday guys!  Be back tomorrow for some firework action!
Posted by Peggy G. at 3:25 PM