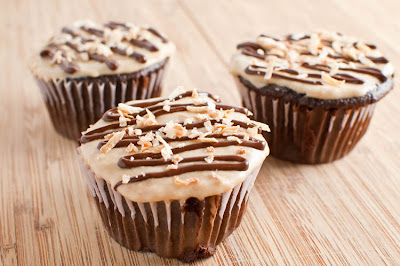 Happy Monday guys!  Today was my first day back to work after vacation, and I'll have to say it wasn't too bad.  But I could use another week of vacation - just sayin'.

How was everyone's weekend?  I volunteered for the MS Walk downtown on Saturday and then came home to take a nap - which led to practically sleeping Saturday away (we didn't wake up until 6!).  Then Sunday we went to a Bats game - the minor league baseball team in town - which was pretty fun too.  I mean, you can't beat hot dogs and baseball, right?

Samoa Cupcakes won the poll on Friday, so I figured I'd get started (and not make you guys wait a week or two) and post that recipe since I had time this weekend!

I'd have to say that these are pretty awesome.  I used my new favorite chocolate cake recipe (seriously, I'm never making chocolate cake any other way) and made a couple adjustments to a caramel frosting recipe - and the end result is something truly amazing. 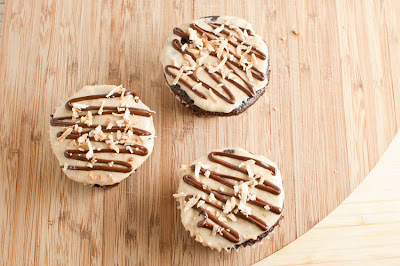 For the cupcakes, preheat oven to 350F.  Line 2 muffin tins with paper liners.

In a large bowl, combine sugar, flour, baking powder, baking soda, and salt.  Add in eggs, buttermilk, melted butter, and vanilla.  Beat with a hand mixer for about 2-3 minutes, or until combined.  On low speed, slowly beat in hot coffee until just combined. (The mixture will be VERY aqueous, but don't fret).  Divide batter among paper liners, filling them halfway full (I ended up with roughly 34-36 cupcakes).

Bake cupcakes on the middle rack of oven for about 20-22 minutes, or until toothpick comes out clean.  Transfer cupcakes to wire cooling rack to cool completely before frosting.

Remove pan from heat and stir in vanilla.  Cool mixture to lukewarm, about 45 minutes, stirring occasionally.

Once mixture is cooled, stir in about 3/4 cup of the toasted coconut.  Add in powdered sugar and beat on medium speed until at desired consistency.  My frosting never got to a very thick state (maybe it was the 2% milk I used, instead of whole milk??), but I actually liked it this way - it was more of a glaze.

Melt chocolate in a microwave-safe bowl in 30 second intervals.  Place chocolate in a piping bag with a fine tip (or you can put it in a plastic sandwich bag with the corner cut off - I like this method because there's no clean up!) and drizzle chocolate atop glaze.  Then garnish cupcakes with remaining toasted coconut. 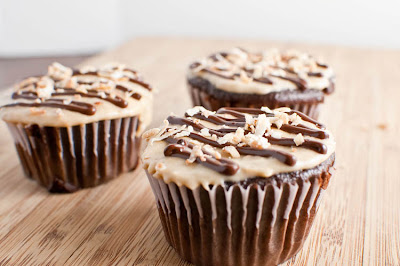 And then try to resist eating all 36 cupcakes.  I had to take several to work this morning, but I think I've still got about 10-15 cupcakes around here.  I've got to hide them from myself - in the fridge.  Which, considering I open my fridge every hour or two, it doesn't seem to be the best of hiding spots.

Hehe, but seriously.  These. Are. Delicious.  Have a great Monday guys!
Posted by Peggy G. at 4:12 PM