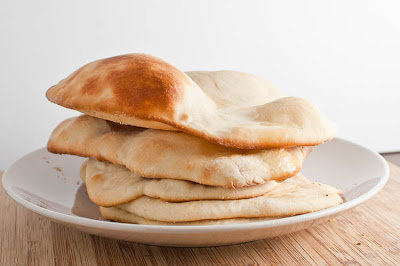 Happy Friday everyone!  This particular Friday is a very special one.  Not only is it April's Fools (don't worry, I'm not going to try any trickery on you guys!), but as of 8:30pm tonight, I'm officially on vacation! 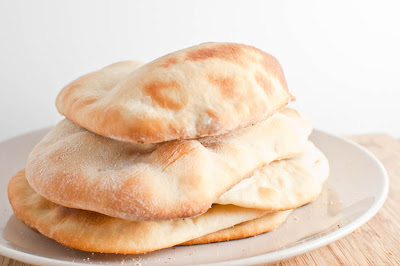 It's definitely more of a "stay"-cation, but hey, I won't have to work for a full 11 days.  So it's going to be amazing. 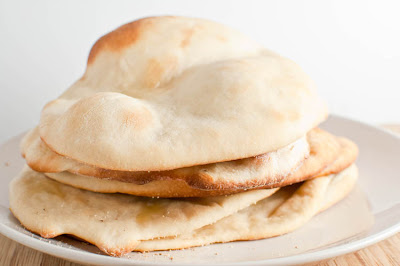 What will I be doing? 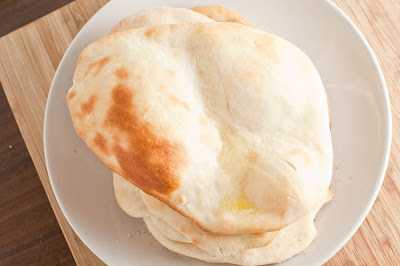 SPRING CLEANING.  There's so much I want to throw out and do over, it's not even funny.  Will I get to it all done in one week?  Umm... no.  I highly doubt it.  I'll probably only get through 3, maybe 4 rooms out of the house, but hey, it's a start.

Anyway, let's get on with some naan!

Ingredients:
Adapted from Food for my Family's recipe 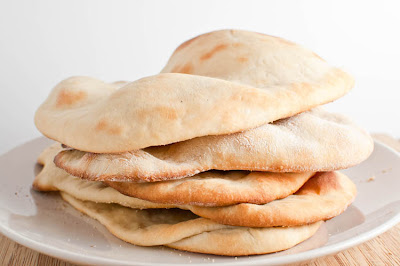 In a small bowl, add the water and sprinkle yeast over top.  Allow to sit for about 10 minutes until foamy.

In a large bowl, combine the flour, sugar, salt, and baking powder.  Mix in olive oil and sour cream until mixture is crumbly.  Slowly stir in the yeast and water mixture until a ball of dough forms.  My mixture was still a tad wet, so I added maybe 1/2 to 1 cup extra flour to get a desired consistency.

Knead dough on a floured surface for a few minutes until smooth.  Place the dough ball in a clean and greased bowl.  Cover and let rise in a warm place for about 1 to 2 hours.

Preheat oven to 500F with a baking stone or an upside-down rimmed baking sheet (i don't have a baking stone, so this is the method I used).

Flip dough onto a lightly floured surface and knead for a couple minutes.  Divide dough into about 5-6 equally sized balls.  Dip each ball into flour and roll out to about 1/4 inch thickness.

Dust preheated baking stone or baking sheet with a light layer of cornmeal.  Wet hands and gently wet each piece of dough before placing them on hot baking stone or sheet (I did batches of 3).

Bake for about 5-7 minutes, or until tops are starting to brown and get bubbly.

Transfer each piece of naan to a plate and top with a pat of unsalted butter. 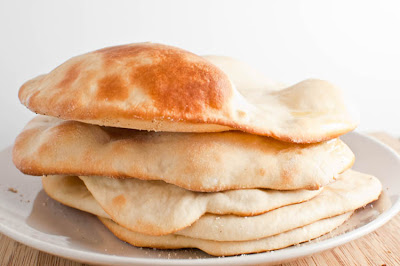 This was my first attempt at making naan and I must say that it couldn't have been easier!  Or more delicious!  I had a 1/2 piece of naan with each of my dinners this week, and it was the perfect accompaniment to my curried lentil soup I had the other night!  It's even great by itself!

How about you guys... have you ever made naan at home?

Have a great weekend guys!  I'll see you next week for some goodies (and maybe some before and after pictures of the rooms I clean out!)
Posted by Peggy G. at 7:33 AM