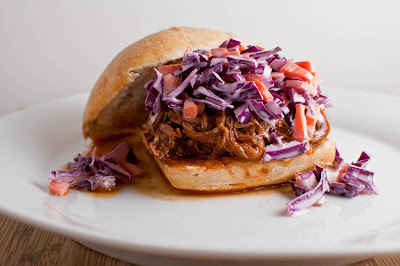 Happy Wednesday guys!  I'm happy to report that yesterday, I signed up to participate in a Louisville chapter of Share Our Strength's Great American Bake Sale!  I'll be participating with the group "Louisville Bakes To End Childhood Hunger" and couldn't be more excited!  All proceeds will go to benefit Share Our Strength's fight to end childhood hunger.  So if you happen to be in the Louisville area and want to be a part of this group (or want to donate from far away) feel free to e-mail me at mtlabor85 (at) yahoo (dot) com and I can direct you to where you need to go!  For more info, check out the Facebook page for the group!

It's been a bit since I did a restaurant recreation and this was probably the most exciting out of the 3 I've done so far.  I mean, who doesn't like barbecue?  So let's get right into it with the review... 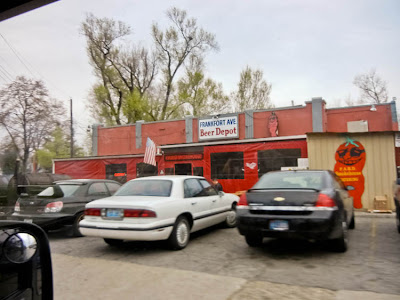 Frankfort Avenue Beer Depot, or more commonly known in the Louisville area as F.A.B.D., is a quaint little place on - you guessed it, Frankfort Avenue.  From the outside, it looks more like a bar than anything, but upon further investigation - especially the gigantic smokers on the outside, and beautiful barbecue smells coming from inside and outside - you can tell that this place is the real deal - they know their barbecue.

The menu is short and sweet, with no more than 6 or 7 appetizers, and various different barbecue dishes - people come here for one thing (well, maybe two - the second being the beer!), and that's definitely the barbecue.  Like I said, they have two smokers on the outside, so they're constantly slow smoking different types of meat - chicken, pork, and beef brisket, it's hard to find something you won't find tasty (well, unless you're a vegetarian - not many choices for you here in the form of entrees).  They also make their own house recipe of barbecue sauce, available in hot and regular.  The hot is definitely hot, and the regular is more of a sweet and tangy kind of sauce - both really good.

We opted for an appetizer of onion rings which were perfectly cut and fried.  They were on the thinner side - which I like - and were served with a side of a tangy remoulade-type dipping sauce. 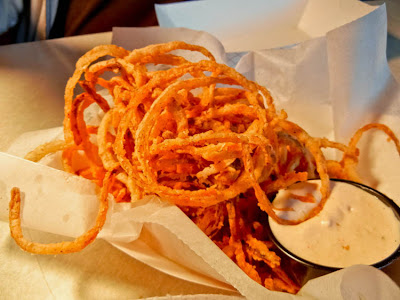 For our entrees, Andy got the Pulled Pork sandwich with a side of coleslaw and I opted for the Lou-a-vul Beef Brisket with a small side of macaroni and cheese.  Both sandwiches come with a pickle and some sliced onions.  They leave the saucin' up to you, which I liked as well - I can decide how messy I want to be! 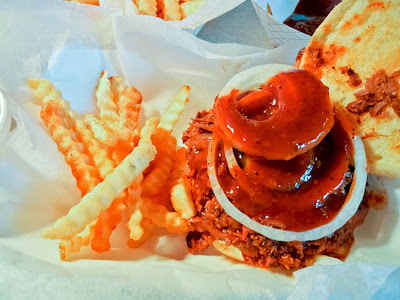 I definitely give F.A.B.D. two thumbs up.  Quick service, home-style barbecue, and definitely a great price - I think we made it out of there in $30 or less.

And now on to the recreation.

I went with recreating my dish, the Lou-a-vul Brisket.  I think pulled meat is a pretty easy thing to recreate - slow and low.  So I focused more on my rub for the brisket and the actual barbecue sauce.  While my finished dish was definitely different from F.A.B.D's version, I think it definitely made one hell of a sandwich! 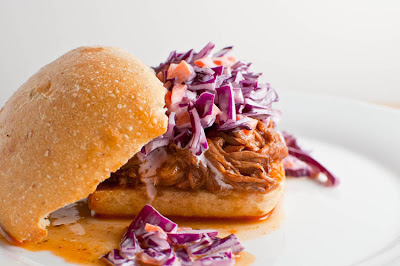 For the Barbecue Sauce:

To prepare the brisket:  In a small bowl, combine the brown sugar, salt, cumin, paprika, oregano, black pepper, and cayenne pepper.  Mix well and then rub mixture all over beef brisket.  Cover brisket with plastic wrap and let sit in fridge overnight. 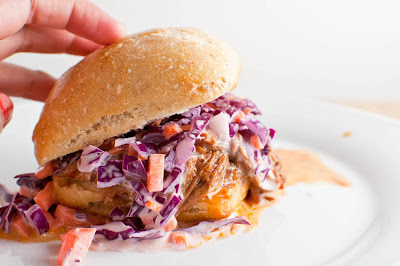 On the next morning, preheat your crockpot onto high and add brisket (you may have to cut it in half to fit it all in there!).  Add about 1 cup of beef stock to crockpot and cover.  Let cook for about 6 to 7 hours, or until brisket is fork tender.

To prepare barbecue sauce:  Combine desired amount of apple cider vinegar (the more you add, the acidic the sauce), tomatoes (or ketchup), brown sugar, mustard, soy sauce, red pepper flakes, and Sriracha.  If using crushed tomatoes, run the immersion blender through your mixture until it is smooth, or at your desired texture.  If using ketchup, no need to worry about that step. 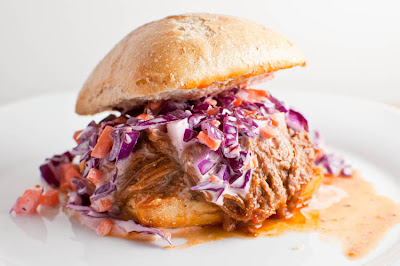 You can use the barbecue sauce on the side, or like me, add it to the crockpot with the brisket and let it meld for about an hour longer.

To prepare the coleslaw:  Combine the mayonnaise, vinegar, and sugar in a large bowl.  Add cabbage and carrots and mix well.  Let sit for about 30 minutes at room temperature before serving.

To assemble sandwiches, toast your sourdough buns and add a decent amount of pulled brisket on the bottom half (the messier the better!).  Top with desired amount of coleslaw (or you can always eat that on the side) and top with remaining bun half.

Dig in and enjoy.  You might need a fork for this one - and plenty of wet naps! 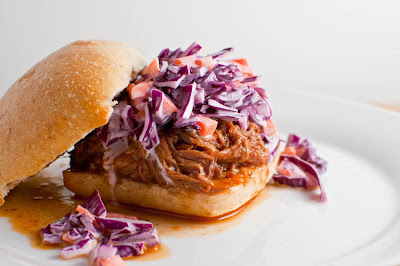 This was really really good.  But I'm afraid to say that as good as it was, it still wasn't as good as F.A.B.D.'s version.  Yup... a recreation that wasn't as good as the original.  Recreation 2, Originals 1. Although I wouldn't chock it up as failure - this is still a killer pulled brisket!  And feel free to substitute pork or chicken with this, too... it's pretty versatile!

Well... I'm off to play sand volleyball (speaking of which, we went 3-0 last week, and hoping to continue the winning vibes tonight) in the cold (57F).  Hopefully I'll move around enough that I'll heat up quickly!  Enjoy the rest of your Wednesday guys!
Posted by Peggy G. at 3:17 PM