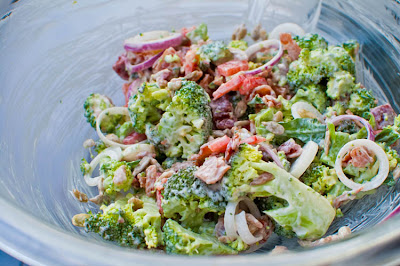 I have a secret.  I claim to dislike mayonnaise or Miracle Whip, or anything resembling the two.  And honestly, I really do dislike those condiments - the majority of the time.

But then there's other times.  Times where I want to make broccoli salad, where I secretly embrace mayo and forget that we have such a tumultuous love-hate relationship.

And don't even get me started on broccoli salad.  I used to think that it was something just old (no offense!) people ate.  I mean, really?  Broccoli salad?    It was just weird.

But then I became a food blogger.  And being a food blogger, I'm practically obsessed with searching through random blogs and broadening my horizons.  And so we come full circle to broccoli salad.  And mayo.  And I'm jumping in head first... because seriously.  This is one of the best side dishes I've made all year.  Yeah.  THAT good.

This post was entered in the event “Get Grillin’ with Family Fresh Cooking and Cookin’ Canuck, sponsored by Ile de France Cheese, Rösle, Emile Henry, Rouxbe and ManPans.
Ingredients: 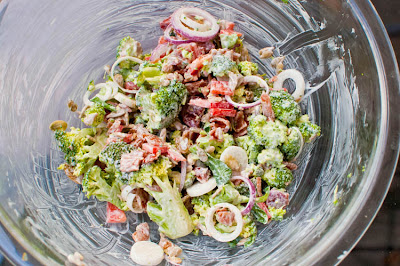 In a small bowl, combine the Miracle Whip (or mayo), sugar, and vinegar until smooth. 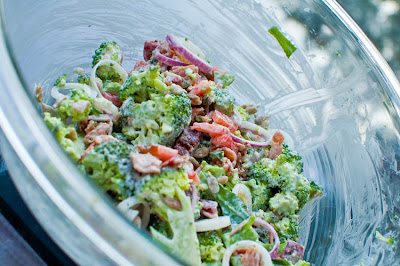 Now, I made the mistake of saying Miracle Whip was the same thing as mayo once... and Andy promptly corrected me.  I didn't know he was the mayo police, but he argued his point and I suppose I can agree (but don't tell him that he's right!).  Either can be used in this recipe though, and I must say, I'm partial to the Miracle Whip version.

Either way, like I said... this is the best side dish I've made all year.  And to think that 48 hours ago I scoffed at broccoli salad.  Never again!

And don't forget, tomorrow is Thursday - which means I'll be doing a CSA round up... so if you want your CSA pics featured, don't forget to e-mail them to me @ mtlabor85 (at) yahoo (dot) com!