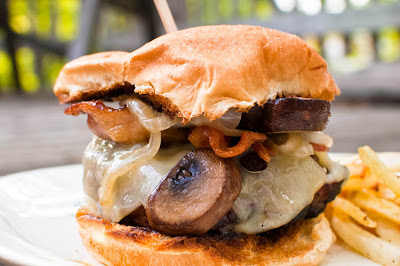 It's been a while since I've done a Restaurant Recreations post, so I figured I'd start the week with one!

Now, a while back, I posted on my Facebook page that I would be trekking around Louisville to find a hole-in-the-wall diner to try.  Upon just seeing the name of this place - Granny's Apron - we knew we had to give it a go.

The restaurant itself is pretty inconspicuous, it's basically a plain brick building - you wouldn't really know it's a restaurant unless you already knew it was there.

We walked in and were promptly seated.  The restaurant was about half full, so you know that something had to bring them there.  One look at the menu and it was a hard decision to pick what we wanted.  They have all your basic comfort foods, from country fried steak to meatloaf.  We decided to do two appetizers, the onion petals and some mozzarella cheese sticks.

The onion petals tasted like a spicy version of a bloomin' onion, and were served with a sauce very similar to bloomin' onion sauce.  They were tasty though.

The mozzarella cheesesticks wern't anything fancy - in fact, they probably came from a frozen package - but hey, we weren't anywhere fancy, so I didn't expect anything more.

For our entrees, Andy chose the fish sandwich and I chose the prime rib burger.

Now let's talk about this fish sandwich.  This thing was huge.  I mean - HUGE.  4 people could have eaten off of this.  And the kicker here?  The sandwich was like $6!  After the sheer shock factor of how big this thing was, Andy said the taste of the fish itself wasn't anything spectacular.

There was pretty much only one word for my burger - messy!  It was juicy though!  It had sauteed mushroom and onions on it, as well as some swiss cheese.  Then to top it all off, there was a boatload of gravy on top.  It was definitely way too messy.

All in all, our meal was okay.  It wasn't anything spectacular, but for under $20, we got your typical diner food - and let's not even talk about the "entertainment" we received while people-watching.

So let's get to the recreation!

I liked the idea of my burger, loaded with goods, but the restaurant version was way too messy!  So I decided to "clean" it up a little bit and here's what I ended up with... 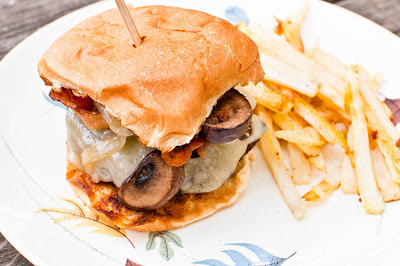 Heat a large skillet under medium high heat and add 1 tablespoon of olive oil.  Add mushrooms and onions and cook until softened and slightly caramelized, about 10-15 minutes.

In a medium bowl, combine the beef, orange juice, soy sauce, olive oil, apple cider vinegar.  Chop up 2 slices of bacon and gently combine in the mix, as well.

Form mixture into 8 patties and season liberally with salt and pepper.

Heat a charcoal grill under medium high heat.  Grill patties for about 4 to 5 minutes per side (for a medium rare), or until at desired doneness.  About a minute before burgers are done, add cheese slices on top (if desired) and cook until melted.

These were extremely juicy burgers!  I don't normally include a lot of acidity like orange juice or vinegar in burger mixtures, but it really worked here.  And you could taste a slight orange flavor in the meat which was a welcomed change!

The burgers were still slightly messy, but manageable, due to the fact that I decided to omit the gravy.

Give these burgers a try for your next grilling adventure and you won't be disappointed! 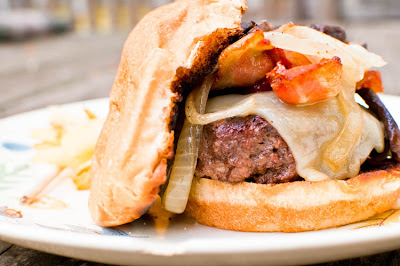