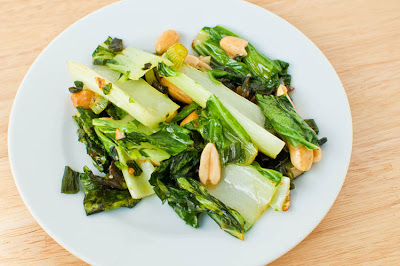 My first day of my "stay"-cation resulted in mass amounts of cooking.  I ended up making some herbed butter, some chutney/marmalade, and some muffins.  Or well, let me rephrase that.  I attempted to make muffins.  I don't know if I'd just pushed my limits and simply forgot, or what.  But I made one of the biggest mistakes in baking - I forgot the sugar.

So my intended awesome blueberry muffins became blueberry biscuits instead.  And let me tell you, it just wasn't the same.  I tried to salvage the situation by making a quick icing glaze, but I was still just not satisfied with myself.  I mean, seriously... how could I forget the sugar?!

And Andy decided to pile a bunch of vanilla ice cream on top of them to help them out.  I give him an A for effort, hehe.

You ever have those days?  Where you just forget to add something in?

How all of that has to do with this bok choy, I don't really know.  But I just had to vent about one of my idiot moments!

Now on to something that I didn't forget any of the ingredients in... 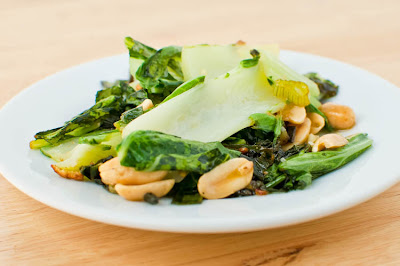 In a medium skillet under medium high heat, add olive oil.  Add green onion, garlic, and ginger.  Stir until fragrant, about a minute or so.

Add bok choy and drizzle a little bit of sesame oil over top.  Season with salt and pepper.  Cover and let steam/cook for about 2-3 minutes, or until bok choy is tender and bright green.

Stir in peanuts and serve. 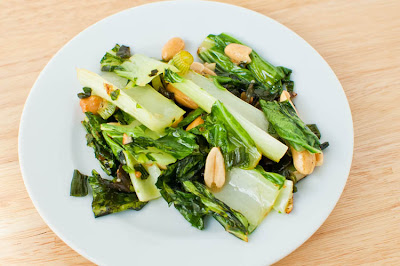 This was a quick and easy side dish that I serve quite often.  I mean, it's ready in less than 10 minutes - why wouldn't I serve it often!  The peanuts give a nice textural contrast to the bok choy, as well!