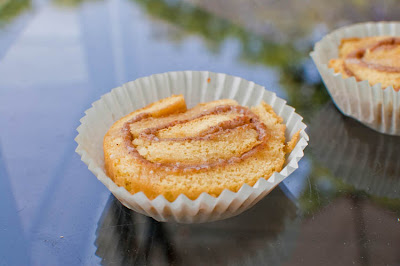 Happy Monday guys!  How was everyone's weekend?  Ours was busy busy busy!

We drove up to Indianapolis on Saturday for a graduation party.  We got to see folks I haven't seen in forever, and it was really great to see them!

On our way up, we stopped at the outlet malls in Edinburgh and LOADED UP on spring/summer clothes.  We're definitely set for the season now!  And on our way back, we stopped to have dinner at Fogo de Chao.

Now, if you haven't heard of Fogo de Chao, it's a chain of Brazilian steak houses - you're given a two-sided card (one side is green, and one side is red).  There are several different servers carrying around different cuts of meat on swords and if your card is flipped over to the green side, they keep giving you meat.  If it's on the red side, they bypass you.

All of my friends suggested we eat there, and heck, it sounded like a good idea.  Well... I must be the only person on Earth that didn't see what all the fuss was about (I know this, because a friend of mine that frequents there often said I was crazy for not liking it).  I mean, yeah, you get to gorge on a bunch of meat, but to me... most of that meat was flavorless and dry.  I don't know, maybe I'm a snob, but I just didn't fall victim to the gimmick.  I'd rather eat my meal for enjoyment, rather than sport.  I seriously just felt disgusting after all of it and more like the Man vs. Food guy.  And for the $114 price tag (that's not even including the tip!)... it was honestly just not worth it - to me, anyway.

But anywho, Sunday was spent relaxing (well Andy relaxed, I worked) and taking it easy.  I did manage to make these cupcakes (which won Friday's poll!) to take with me to the grad party.  I liked them because they were different - all of the cinnamon roll flavor, without all the cinnamon roll waiting! 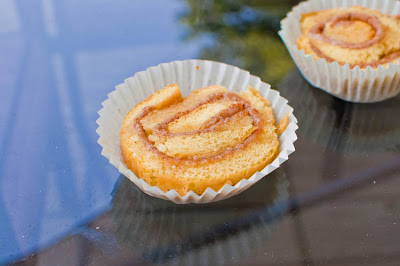 In a medium bowl, beat cream cheese, 1/2 cup sugar, and cinnamon until smooth.  Beat in 1 egg until incorporated.  Spread mixture over parchment paper in an even layer (it won't cover the entire surface, but make as even of a rectangle as possible - I probably has 1 inch margins from the edge of the pan).  Set baking sheet in fridge until needed.

In a medium bowl, beat the remaining 3 eggs until they are fluffy, about 2 minutes.  Beat in the 3/4 cup sugar and beat for another 2 minutes.

Bake for about 20 minutes, or until cake is set.  Let cool only slightly.

On a clean surface lined with parchment paper, carefully invert the cake onto the paper.  Carefully peel away the parchment paper from the bottom of the cake.

Using a pizza cutter, slice the cake into as many thin strips as possible (about 1/2 inch wide) - I think I got about 18 strips.  Heat Oven to 350 does a good job depicting this here (they made a cake though, so that's why their strips are wider and mine are thinner for the cupcake version).

Roll the strips jelly-roll style and place in cupcake liners.

To make the glaze, combine the powdered sugar, milk, and clear vanilla extract in a small bowl.  Mix until at your desired consistency.  Drizzle glaze over top of cupcakes. 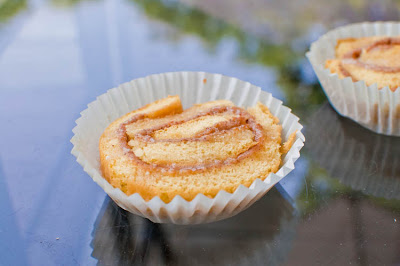 See how easy that is?  Compared to actual cinnamon rolls that take hours to complete - because of all of the dough rising time of course! - this is a quick and easy version that's ready in less than 45 minutes!  You can't go wrong with that!

Have a great Monday guys!  I'll be back tomorrow with a garden update!
Posted by Peggy G. at 7:16 AM