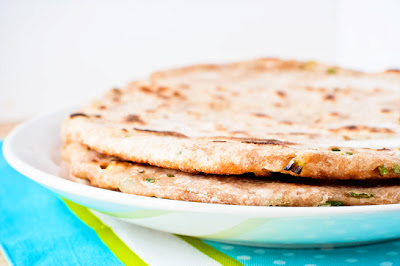 The only thing I managed to snag from the garden this year, besides an ongoing supply of lettuce, were some early green onions.

When I buy them from the store, I can never use up the entire bunch.  I'll use a couple for garnish and then forget about the rest of them.  And the same thing was starting to happen with the ones I picked from the garden.  So instead of letting them go to waste, I decided to use a whole bunch in some scallion pancakes.  Something I've always wanted to try to make, but always put on the back burner.

And I don't know why, because they're so easy and they make a great little snack when paired with a spicy soy sauce! 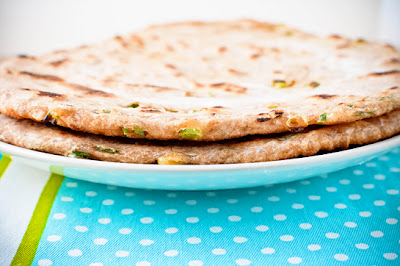 In a large bowl, combine the whole wheat and all purpose flour with the boiling water.  Knead until a pliable dough is formed, adding more flour or water if necessary.

Since I used whole wheat flour, I had to knead for a little bit for my dough to become elastic enough to use - maybe 10-15 minutes?  Of course, a mixer with a dough hook would be useful here, but I keep it old school because I don't have one of those fancy schmancy mixers (until Christmas! My mom spilled the beans and said she was getting us/me one!).

Divide the dough into 8 equal sized pieces.  Roll the dough as thin as you can, without it breaking.

Spread about a tablespoon of olive oil on top of each circle, and then drizzle with a very small amount of sesame oil (a little goes a long way!).  Mix oils together and massage into the dough until covered.  Sprinkle with salt and a good amount of the scallions (remember, you have to do this 7 more times, so don't go too crazy with it!).

Roll the dough into a long rope (Kirbie's Cravings does a great photo tutorial on this, so check it out if you have questions) and then coil the rope into a circle.  Flatting with a rolling pin to about 1/4 inch thickness - this ensures that the scallions get evenly distributed throughout the pancake.

Repeat this process with remaining pieces of dough.

Heat a nonstick skillet under medium heat and add one pancake.  Cook until golden brown, about 1 & 1/2 to 2 minutes.  Flip over, and cook an additional minute or so.

Cut into triangles and serve with a spicy soy sauce (simple soy sauce with red pepper flakes and some grated ginger).

These make a great snack that feed a decent amount of people!  I've even used them as a wrap for Asian-inspired wraps (Bulgogi wraps?!). 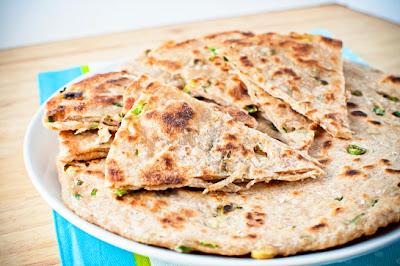 Have a great Friday guys!  I've got my first Culinary Theory class tonight and the lab tomorrow - I'll have a chef's uniform by tomorrow morning!  So exciting!!
Posted by Peggy G. at 9:01 AM