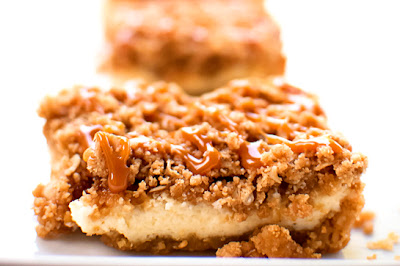 I just have to make it until the end of my shift tonight and I've got one sweet week of vacation.  It's another stay-cation, but there's loads of things planned next week!

First off, it'll be my first week of Culinary School, which I've already told you has me in an emotional rollercoaster - but it's for the best!  And then there's my big meeting with the executive chef at a local restaurant - another thing to make me a nervous nelly!  And then there's a haircut - a much needed haircut.

Maybe in the midst of all of that I can get myself to do some wedding planning!  We'll see...

I made these last week for a co-worker's birthday.  She loved them and I hope you guys will too! 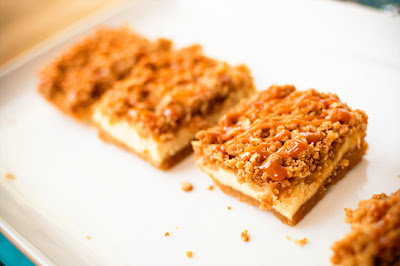 To make the crust, combine flour and brown sugar in a medium bowl.  Cut the butter into the mixture with your fingers or a fork until the mixture is crumbly.

Press the dough into a 9x13 inch pan in an even and flat layer.  Bake for about 10 to 15 minutes or until lightly browned.  Set aside.

Make the filling by beating cream cheese and 1/2 cup of sugar in a large bowl.  Add eggs, one at a time, until just incorporated.  Stir in vanilla until just combined.

In a small bowl, combine the apples with the cinnamon and 2 teaspoons of sugar.  Let sit for about 1-2 minutes, then gently fold into cream cheese mixture.

Pour the batter over top of the warm crust.

Make the topping by combining the oats, flour, and brown sugar.  Cut the butter into the mixture until it is chunky and crumbly.

Top the cream cheese mixture with an even layer of the topping.  There's a lot of it (which I love!) so don't be afraid to go crazy.

Bake for about 30 minutes, or until cream cheese mixture is set and topping is a nice golden brown.

Make your caramel topping by combing the caramels with heavy cream in a thick microwave-safe bowl.  Heat in 20-30 second increments, stirring really well after each time.  Be careful because it can go from nice and creamy to burnt in a matter of seconds.  I don't think I heated mine up for any more than 45-60 seconds.  Just keep stirring and the residual heat will melt the unmelted caramels! 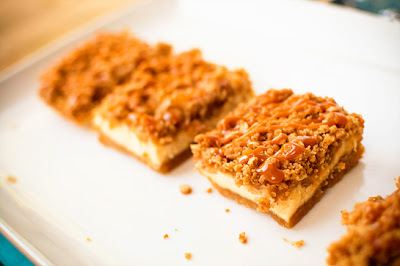 I found that the bars were easier to cut after being refrigerated for a little bit, about an hour or so.  Cut into desired sized bars and be prepared to watch these disappear quickly!

All the flavor of a caramel apple in a nice convenient fall-inspired bar!