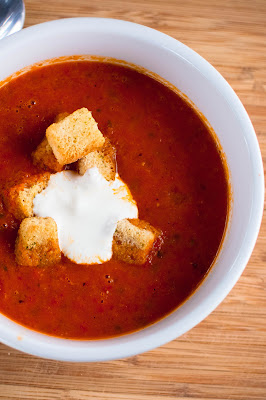 "Carmageddon" has officially hit Louisville.  While probably not as drastic as the major traffic that was caused in Los Angeles - but definitely something that perturbs me.  I love Louisville for the fact that it doesn't have 'major city traffic'.  Sure, we have crazy rush hour, but nothing compared to cities like LA, New York, or even Nashville.

Until last Friday.  The Sherman-Minton bridge was closed "indefinitely" due to some cracks found in some foundation beams.  While yes, safety is priority - it has put Louisville (and most parts of Southern Indiana - as the bridge connects New Albany, IN to Louisville) in a traffic tizzy, because now everything has to filter through to the other bridge (The Kennedy) - adding about 76,000 more cars that way.  And don't even get me started on the stupid detours.  My normal 20-25 minutes commute to work took a little over an hour today.  Yeah, I wasn't in a good mood.  But surprisingly enough, my commute home was more of normal pace, about 30 minutes.  I'll just have to think smarter for tomorrow's drive in.

Now that I've got my rant out of the way (I'm sure you all just wanted to hear about my traffic annoyances, right?) - let me tell you about something that calms me down... soup.  Yes, soup.  Now that fall has set in, soup will be a regular occurrence in our house - at least weekly.  And this week's soup?  This wonderful tomato and roasted red pepper soup.  Perfect for dipping grilled cheese! 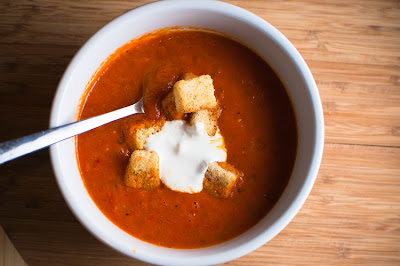 Broil red peppers under a broiler or open flame on gas stove until charred on all sides.  Place red peppers in a bowl and cover with plastic wrap.  Set aside until cool enough to handle.  Peel, remove seeds, and roughly chop.

Heat the olive oil in a large pot or dutch oven.  Add onion and garlic.  Cook until soft and translucent but not brown in color, about 3 to 5 minutes. Then turn the heat on high and mix in the tomatoes, tomato paste, peppers, cilantro, cumin, and paprika. Sauté the mixture for a minute or 2, and add the chicken stock.  Bring mixture to a boil, lower the heat and simmer for about 30 to 40 minutes.

Allow the soup mixture to cool slightly, then puree it with an immersion blender. Bring the soup back to the boil and season with some salt and pepper. Serve with a dollop of sour cream, some croutons, and a grilled cheese sandwich (if you're the dipping kind of gal like me!) 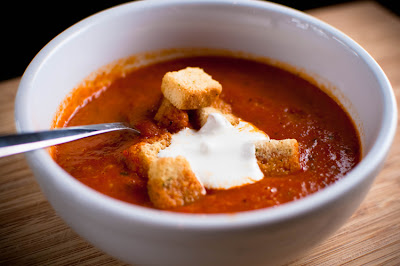 This was super tasty, made great use of our CSA tomatoes, and will be a soup that paired perfectly with a simple grilled cheese!


Hope you guys have a great Tuesday!  See you tomorrow night!
Posted by Peggy G. at 4:49 PM