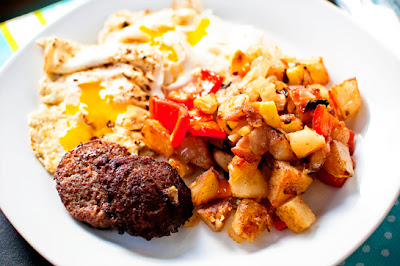 I was a bundle of nerves stepping foot into Jack Fry's.  It was thanks to a good friend of ours, Terry, that I even got this opportunity.  While our meeting was a quick one, I appreciated the fact that the chef took time out of his busy day to meet with me and give me this chance.  I have to call back Friday to see when he can fit me in, but it would be at least a 12-week internship-type deal.  I'm truly grateful for the chance to gain some restaurant experience.

Walking into the classroom for the first time, was much of the same.  A bundle of nervousness.  It was a Basic Nutrition class, so there were a mixture of upper-level students.  And turns out, I was the only first quarter culinary student in there.  The only person not wearing a uniform.  So I kind of felt a little out of place - but after Saturday (my culinary lab), I'll have my uniform, and I won't feel like such an outcast.  Besides my initial fear, the nutrition class is pretty much a science class, so I felt comfortable with most of the material, being a former Biology major.  There's some fun projects coming up - including a recipe book (which I'm most excited about), so I'm excited to learn.  Friday and Saturday are the classes I'm most looking forward to though - Basic Culinary Theory and the Lab to go with it.  So I'll be sure to do a full report next week on those two!

Anyway, you came here for the food right?  We've been eating a lot of breakfast-for-dinner type meals lately.  I don't know why, but I don't see any complaints from Andy - seeing as he'll usually have two platefuls when I decide to do this!

I love making hashes or potato-type dishes for breakfast.  They're easy, filling, and so versatile.  I had some sweet peppers from our CSA that needed to be used up, and so I thought this was a perfect fit! 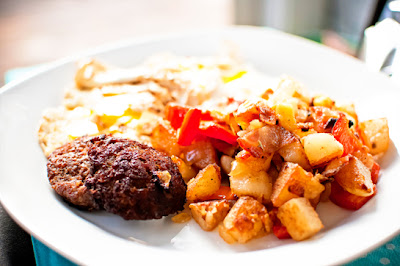 Bring a large pot of salted water to a boil.  Add potatoes and cook for about 20-25 minutes, or until almost fork tender.  You want them to disintegrate when you touch them!  Drain.

Heat the oil in a cast iron skillet over medium heat until hot.  Add the onion and peppers. Cook for about 5 minutes, or until starting to soften. Add garlic and stir for another minute or so, until fragrant.  Transfer the onion mixture to small bowl and set aside. 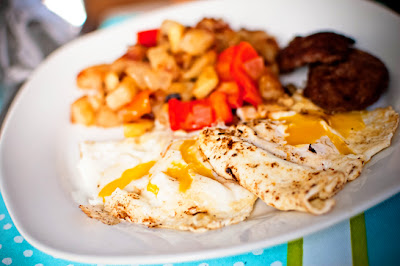 Stir in the onion-pepper mixture and carefully toss until all is combined. Season with salt and pepper to taste.  Serve with some sausage and eggs for a complete breakfast!
Posted by Peggy G. at 8:43 AM