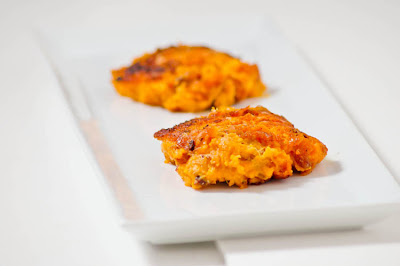 It is freeeeeeeezing outside.  It's feeling like double jacket weather.  I'm sure I'm just over-reacting.  It's really only 33 degrees outside, so we're above freezing so far.  But dude... I don't like this cold weather!

I've been working on my positive attitude, lately, and you know what... sometimes stressful situations do work out better when you've thought positively from the get go.  I've been trying to let myself not get frustrated at work with my fellow co-workers.  I'm only on day 2 of this positive attitude campaign, but you know... I think I may stick to it.

Of course... you guys don't see the negative Peggy.  The Peggy that comes to blog here, she's happy.  She's not stressed, and she's usually eating while she types.  So maybe I can merge these two Peggys and find a "happy medium" in between?  Maybe?  We'll see.

Anyway, now that I've randomly ranted... today's recipe is absolutely delicious.  Morning, noon, or night - these things are perfect.  We had them as a side for our Pork Tenderloin that we had a couple nights ago and they were delicious! 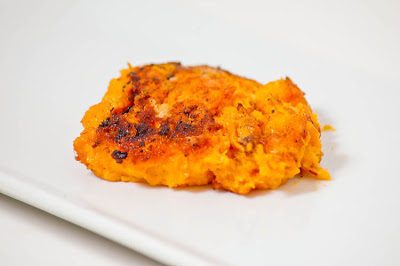 Adapted from How Sweet It Is's recipe

Place the sweet potatoes in a large pot of boiling water and cook until tender, about 25-30 minutes minutes.  Drain and return potatoes to pot.

Add butter and cream to potatoes and mash with a potato masher.  I like some texture to my mashed potatoes, so that's why I didn't use my immersion blender (but if you like a smoother mash, by all means, go right ahead!  Season with salt and pepper, to taste.

Let mixture cool slightly and place in fridge to cool, about 10 minutes.

Meanwhile, heat a large skillet under medium high heat and add bacon.  Cook until fat is rendered and bacon is crispy.  Remove bacon with slotted spoon and mix into sweet potato mixture along with cayenne pepper, leaving the bacon grease in skillet.

Form mashed sweet potatoes into patties and sprinkle flour onto both sides.  Fry patties in the bacon grease and cook for about 3-4 minutes per side, or until golden brown.  Serve hot and fresh as a side, or eat them as is! 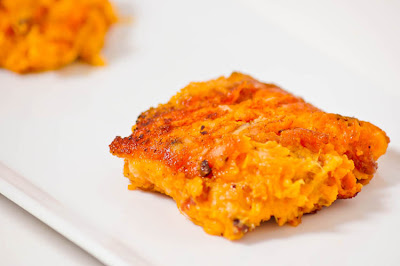 These were pretty awesome.  Definitely addicting, if you ask me!  We've had an abundance of sweet potatoes and this was just a slight change-up from the norm.  Enjoy guys!
Posted by Peggy G. at 2:48 PM