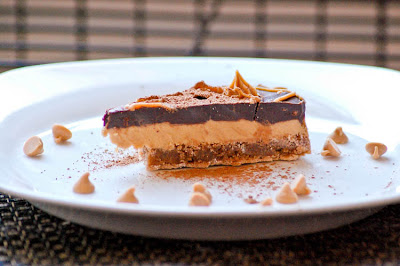 Yes, this day has finally come!  I know some of you may not have thought I'd post this, but I promised you I would!  Better late than never, right?

I even thought, at one point, that I had ruined this cake.  I blame it on the short cat nap I took while the cake portion was in the oven.  Thank goodness for internal time clocks, though!

I've convinced myself that I need to do more baking, and I thought you guys could help me out!  Pretty please?  So anyway, once or twice a month, (maybe more if I'm (or Andy) is feeling an extra sweet tooth) I'll have a poll up with ingredients.  You choose the ingredient you'd most like to see in a dessert and I'll surprise you guys with a dessert the following week.  Good deal, eh?  You'll find this upcoming week's poll at the end of this post.

But first, we must talk about buckeye cake!

So who knows what a buckeye is?  (:::Looking around:::)  Okay, some of you.  Well... let's get a little history lesson for those of you who don't know, maybe you do know, but just didn't know it was called a Buckeye?

Okay, well a Buckeye tree is native to Ohio and has these nuts on them, that well... look like a male deer's (also known as a buck) eye.   So that's the nut up above.

Well, some creative dessert geniuses decided to make something even better, that resembled the look of a Buckeye nut.  If you look at the picture above, it looks like peanut butter in the center and chocolate surrounding it, right?  And that's exactly what a Buckeye is!  Chocolate dipped peanut butter balls.  And they're pretty much awesome.

So wouldn't it be even more awesome to turn this into a cake?  Uhh... hell yeah it would!  So thanks to a Nestle Tollhouse recipe, this creation actually exists! 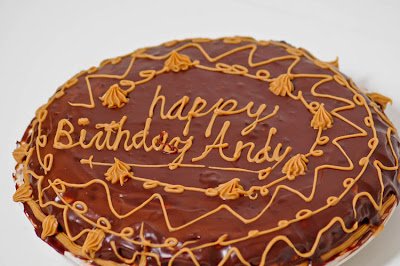 Grease 9-inch-round spring form pan (you could use a cake pan, but unfortunately I don't have one of those).  Line the bottom of pan with parchment paper and grease that, as well.

Bake for 25 minutes or until a wooden pick inserted in the middle comes out clean.  I'm pretty sure I just dozed off for a couple minutes after the timer went off, so my cake came out a little more like a cookie, than a cake... but it worked out for the best!  Cool on wire rack for 5 minutes.  Run a knife around edge of cake and cool for an additional 10 minutes.  Invert cake onto serving platter.  Remove pan and carefully peel off parchment.  Cool cake/cookie completely.

For the Peanut Butter Layer: Beat peanut butter, butter and vanilla in a medium bowl until combined.  Gradually beat in powdered sugar.  Spread mixture on cake. Refrigerate for 30 minutes.

For the Ganache: Heat cream in small saucepan to boiling and then remove from heat.  Add dark chocolate morsels and let stand for 5 minutes.  Stir until smooth.  Refrigerate for 30 minutes or until mixture is spreadable.  Spread chocolate on top and sides of cake.

Melt the peanut butter chips in a small heatproof bowl in microwave, about 30 seconds.  Spoon mixture into a piping bag.  Decorate cake as you wish (in my case, some Happy Birthday and star bits)  Not bad for my first cursive cake decorating, eh?  I could definitely use some work (notice the "a" and "y") Store in refrigerator until set.  Let stand for 30 minutes before serving.

And there you have it... the most enjoyable cake Andy has ever put in it mouth.  And I'm not just saying that... he told me so!!


Oh, and here's the poll guys!  I'll probably post the dessert recipe either on Wednesday or Friday of next week!!