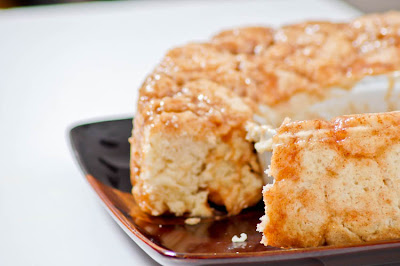 Happy Monday!  Everyone have a good weekend?  We surely did.  And anybody see that Eagles vs. Giants game yesterday?  Purely awesome!  And that's why Philly is going to the Superbowl!  Well, I hope so anyway.

It's going to be a busy week because I'm making myself make a different baked good/treat every day and then by Friday/Saturday, I'll have a variety of treats to wrap up and gift!  I've got some lucky recipients!

I should have known this by some of the comments on the Chocolate Chip Cookie post, but a Dessert Bread won the poll by a landslide!  You guys must love your breads!

Lots of people talk about Monkeybread as a treat they remember from childhood or whatnot, but I don't think  I actually learned about it's existence until a few years ago.  So I figured, why not.  Let's tackle it.  I just had one minor setback.  No bundt pan, and I really didn't feel like going out to buy one.  But I also didn't want to change my dish.  So, my inner Macgyver devised the perfect vessel for my Monkeybread.  Basically, if you don't have a bundt pan, take a deep cake pan, or a spring form pan (this is what I used) and place a small heat proof bowl in the center (in my case, I used a ramekin), and voila!  Instant, ghetto, bundt pan! 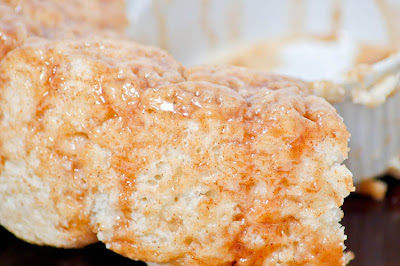 This is actually the first recipe I've tried using yeast that didn't require "proofing" it first.  I was skeptical, at first, but everything panned out, so you have my assurance that this should work!

In a large bowl, mix 2 cups of the flour and the yeast.  Add the water, vegetable oil, sugar and salt.  With a hand mixer, beat on low for about a minute and then increase the speed and mix for a 2-3 more minutes.  Add in the remaining flour until you achieve a good, sturdy dough.  Knead the dough on a lightly floured surface, until it is smooth and elastic.  Grease a large, clean bowl and form the dough into a ball.  Place the dough ball into the bowl and cover with a damp cloth.  Let dough rise for 1 & 1/2 hours, or until doubled in size.  Punch the dough down and divide it into half, and let rest for and additional 10 minutes.

Meanwhile, to make the monkey bread "sauce", combine 1 cup sugar, brown sugar, milk, butter and 1 1/4 tsp cinnamon in a small saucepan over medium high heat.  Bring the mixture to a slow boil and cook it for about 1 minute, or until slightly thickened.  Remove from the heat and let it cool for 10 minutes.

Combine remaining 1/4 cup sugar and 1/2 tsp cinnamon in a shallow bowl.  Pick small portions of dough and form into small balls, until you've used up all the dough.

Preheat oven to 350 F and grease a bundt pan (or use my alternate pan that I've described above!).

Roll each portion into the cinnamon sugar mixture and layer the balls of dough in your chosen pan.  Sprinkle any remaining cinnamon-sugar mixture over the layers.  Pour the cooled sugar syrup over the dough.  Cover the pan with a damp cloth and let it rise for 35 minutes or until doubled in size.

Bake the bread for about 25 minutes or until lightly browned.  Loosen the edges of bread from the pan using a knife.  Place a plate over the top of the pan and carefully invert the bread onto the plate (or you can just release the springform pan). 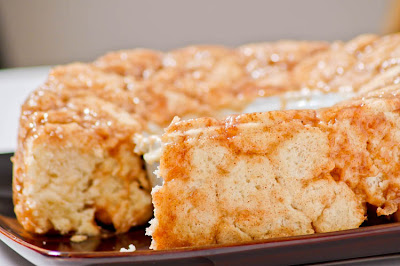 Hope you guys liked the bread recipe and hope to get some more treats posted this week (but I've got some good dinners planned too, so savory might win out over the sweet stuff!)  Have a good rest of your Monday!  Enjoy guys!
Posted by Peggy G. at 2:43 PM