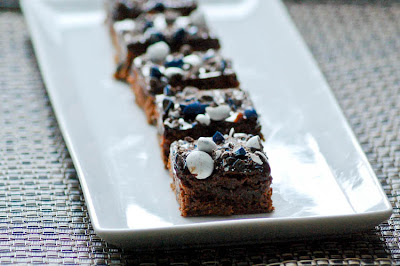 Thanks to everyone who voted in the poll last week! Only had 19, but hey, not bad for the first go! Right? So maybe I can convince more to vote after I've concocted up some good eats? Maybe?

Well, there was a tie! Chocolate and Almonds were at the top of the list in a tie! And instead of taking the easy way out, and making something that included both ingredients, I've decided to split it up and do two different things! Sound good?

And I figured you all wouldn't be upset if I rocked out the chocolate first? Would you? Trust me, you won't be disappointed with these babies! 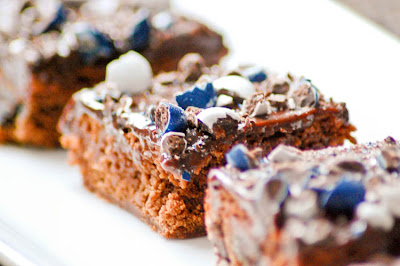 Preheat oven to 350 degrees.
Line a 9x13-inch baking pan with foil, leaving a little overhang. Grease the foil with shortnening.
Melt 1 cup of the chocolate and all of the butter in a glass bowl in the microwave in 30 second intervals, stirring each time until melted and smooth.  Mine was melted in about 1 minute.  Cool chocolate mixture for about, 5 to 10 minutes.

Bring the heavy whipping cream to a simmer in a small saucepan over medium heat.  Remove from heat and add remaining 1 cup of chocolate.  Let sit for about 5 minutes.  Whisk in peppermint schnapps and stir until mixture is smooth.  Pour chocolate ganache over brownies in the pan and spread to cover completely. Let ganache cool for about 15 minutes and then sprinkle on crushed York peppermint patty candies.  Let sit in refrigerator for at least one hour before cutting. 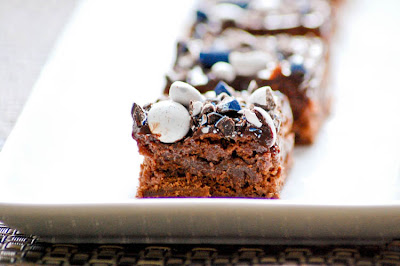 Using the foil overhang as an aid, lift brownie sheet from pan. Fold down the foil edges. Using a large sharp knife, cut brownies into small individual pieces, wiping your knife with a hot, moist cloth after each cut.  Arrange the brownies on a platter and serve (or keep them to yourself, as Andy suggested).

These were great!  I brought them into work and everybody who tried one said they were pretty tasty!  I love the layer of ganache on top of the brownie, too.  It just gives it that extra something special!  The only thing I regret is that the peppermint candies were white and blue, and someone commented at work today that I made Colts brownies... I almost didn't let that certain someone have a brownie. =)  Hehe!  Enjoy guys!  And definitely be prepared for an awesome almond recipe in the next few days!
Posted by Peggy G. at 4:51 PM