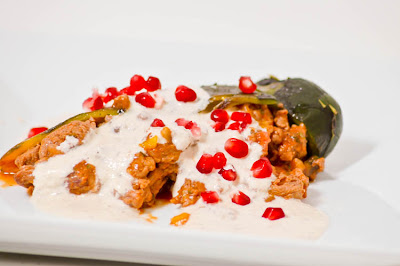 Happy Monday!  How was everyone's weekend?  We had a pretty eventful weekend, actually.

This past Friday was the first one in a little while that I haven't had to work past 8:30 so you better believe I took advantage of it!  We actually went out with a few girls from my softball team and had a blast.  We even played Lazer Tag (which I haven't played since I was like 10, so it was nice to act like a kid again!).

Saturday we went out and had dinner at an Indian restaurant, Dakshin.  It's pretty good and we haven't had Indian food in a while so it was nice to fill our bellies!

Of course, Sunday was football day, and my Philadelphia Eagles showed the Colts and Peyton Manning who was boss!  I love watching the Colts lose, not only because all of my friends are Colts fans, but because I think Peyton Manning is such a goober, hehe.  And the fact that the Eagles beat them made it all the better!

Anyway, recipe time!  I don't know about you, but I found it quite hard to make this poblano look "sexy"!  The pictures don't do this meal justice because it was absolutely delicious.  The wild combination of flavors just all come together into one well-rounded meal! 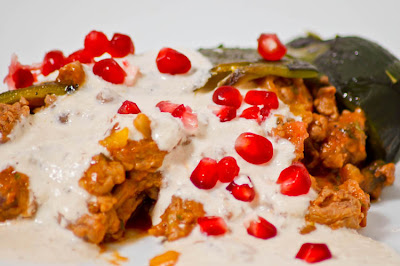 To prepare the peppers, roast them over an open flame on a gas stove (or alternatively, broil them in the oven) until they are charred all over.  Place in a bowl and let cool for about 5 minutes.

Scrape off the charred skin of the peppers.  Cut a slit on the side of each pepper and using kitchen scissors, clip the area about 1/2 inch below the top stem (the part with the seed clusters).  Carefully brush out any seeds.  Lightly brush the outside and inside of the peppers with olive oil.  Season with salt and pepper.

Heat a large skillet under high heat and add 2 tablespoons of olive oil.  Add onion and garlic and cook until softened, about 4-5 minutes.  Add ground beef and cook until it is no longer pink, about 7-10 minutes.  Drain any excess fat off of the skillet.

Stir in tomato sauce, apricots, almonds, and parsley into the beef mixture.  Season filling with salt and pepper, if needed.  Let cool, slightly.

Carefully stuff the poblanos with the beef mixture and place in baking dish.  Cover with foil and bake for about 5-10 minutes, or until heated through.

While the peppers are baking, you can make the queso sauce.

In a medium saucepan under medium heat, add queso fresco, walnuts, sugar, and milk.  Heat until cheese is melted, about 10 minutes.  Cool slightly and season with salt and pepper.  Using an immersion blender, blend mixture until nice and smooth.

Transfer the peppers to individual plates and top with queso sauce.  Top with pomegranate seeds and dig in! 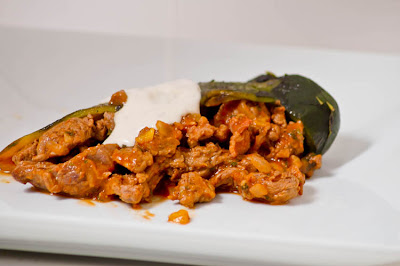 At first, I thought the pomegranate seeds were kind of a pointless garnish, just used for color purposes.  But really, the flavors of the poblano, stuffing, queso, and pomegranate together is just something magical.  It all works, and it's all a party in your mouth.  It is purely delicious.  I just wish the pictures came out better to show how awesome this dish is!  Enjoy guys!
Posted by Peggy G. at 5:57 PM