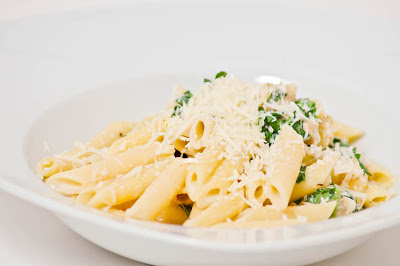 Well, the weather has been awfully weird the past couple of days.  It's been in the mid 70's here!  It's the middle of November and I'm out there wearing shorts and a T-shirt!  Who would have thought?!
I'm trying to get a head start on my Christmas shopping this year.  I've already got my Grandma, Dad (thanks to my sister!), and part of Andy's mom!  This is record pace for me because I'm usually hustling and bustling about a week before the big day!  I know, I know... it's not even Thanksgiving yet.  But hey... early bird gets the worm!
Anyway, I've been on a pasta kick this week, so here's a little dish I just threw together based on certain things I had in the fridge.  The dish could definitely use some work... Andy and I both nit-picked at different things about it that we thought were a little "off", but it's definitely a dish that has potential once it's refined! 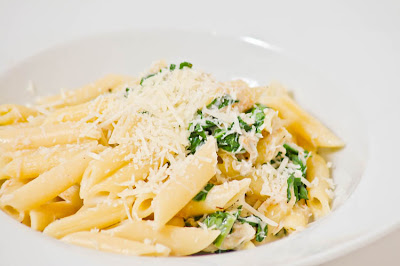 In a salted pot of boiling water, cook penne according to package directions, about 10-12 minutes. Drain and return pasta to pot.
Heat pot under medium heat and add cream.  Slowly stir in the Parmesan until incorporated in sauce and pasta.

Serve with garlic bread, top with Parmesan cheese, and dig in! 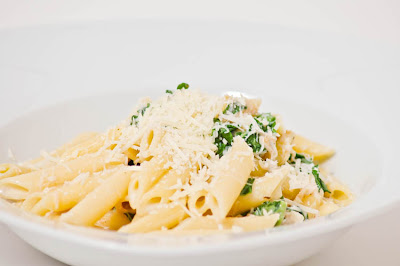 Like I said, this dish is definitely in it's beginning stages of being something great.  I've never used Mizuna before, but I've used Arugula plenty of times in pasta.  I wasn't a big fan of these two greens in this though.  I don't know if it was because of the mixture of both or one overpowered the other, I don't know.  Andy didn't seem to mind the greens though.

But Andy wasn't too fond of the crab meat in there, but I actually liked that part.  So go figure.  I'd definitely try this again, and maybe instead of the greens use asparagus or broccoli or something.  And then probably just leave out the crab meat for Andy's sake.  Oh well, we live and learn!  Enjoy guys!
Posted by Peggy G. at 4:10 PM