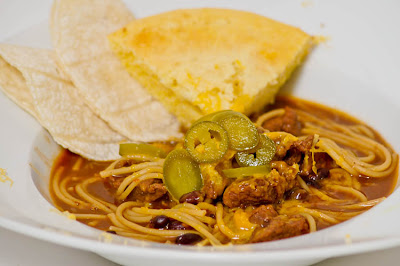 Happy Monday!  How was everyone's weekend???

Ours was pretty fantastic!  Andy's birthday was Saturday and I tried to make it as awesome as possible!  I made him a Buckeye Cake (Everybody knows what a buckeye is right?  Peanut Butter.  Chocolate.  Need I say more?  It was definitely a rich cake (too rich for my taste, but right up Andy's alley!) and he even said it was one of the best cakes he's ever eaten!  Score!

We also went to dinner at the Village Anchor which was pretty damn awesome, if I do say so myself!  And it was funny, too, because when we first walked in John Schnatter (Papa John's Pizza Owner) was just sitting casually at the bar.  I don't get star struck by any means, but famous people just amuse me.  Hehe.

Anyway, then Andy wanted so desperately to go see the new Harry Potter and so I took him!  We're not Harry Potter fans at all, he was just amazed by the cinematography, and I guess I do have to admit, it was a pretty good movie, and they slyly split it up into two movies so we just have to go see the next part.

Enough about my weekend, shall we get to a recipe?

I can't claim that this is a true Texas-Style Chili because I made a TON of adaptions to this, and well... I've never been to Texas and eaten chili there, so I have no basis for comparison.  But either way, whatever you want to call this, chili, stew, what-have-you, it was delicious. 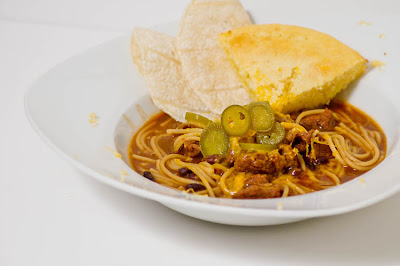 Heat a large skillet under medium high heat and add chiles.  Toast under just charred on all sides, about 4-6 minutes.  Place chiles in a heatproof bowl and cover with boiling water.  Let chiles soften in liquid, about 20 minutes.

Drain the chiles and transfer to a tall bowl or container.  Add chipotle peppers and coffee.  Blend with an immersion blender until smooth.  Slowly add in beer and blend again for a minute or two.  Set aside.

Bring out the crockpot (1st crockpot recipe of the fall season guys!) and turn the heat on to high.

Heat a large skillet under medium high heat and add olive oil.  Season the sirloin with salt and pepper and add half of it to skillet.  Cook until browned on all sides, about 8 to 10 minutes.  Remove from skillet with slotted spoon and cook other half sirloin in the same manner.  Return all meat to skillet and cook until heated through, about 1-3 minutes.

Add onion and garlic to skillet with meat and cook until onion starts to soften, about 3-5 minutes.  Stir in coriander, cumin, cinnamon, and cloves.  Transfer mixture to preheated crockpot.

Pour in chile-beer mixture into crockpot with meat.  Also pour in beef stock and black beans.  Let heat in crockpot for about 2-3 hours.

Ladle out 2 cups of the sauce and whisk in corn flour.  Return sauce back to chili and heat for an additional 30 minutes, or until slightly thickened.

Add in spaghetti noodles and cook until they have softened.  Season with salt and pepper, if needed and add a little bit of Sriracha for some spice.

Ladle chili into bowls and top with cheddar cheese and jalapenos!  We also served this with corn bread and some warm tortillas. 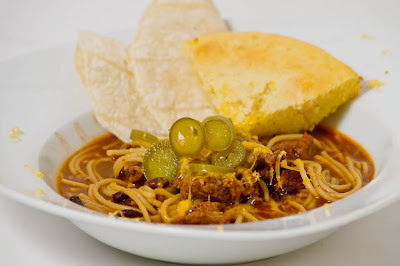 This definitely wasn't as thick of a "chili" as I wanted, so Andy dubbed it more of a stew than anything.  It definitely had flavor and for those of you used to tomato-based chili's, just chili-based chili is pretty rockin' so I'd definitely give it a try sometime!  Enjoy guys!
Posted by Peggy G. at 4:44 PM