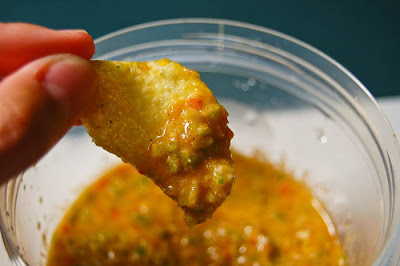 How was everyone's weekend?  Ours was pretty laid back.  We went to eat at that Colombian restaurant on Friday and definitely had some good grub!  Saturday we both worked and were pretty exhausted by the end of the day so we just stayed in and watched a movie.  Sunday, was of course, football day!  My Eagles won and I definitely won 2 out of 3 of my fantasy football leagues, so all in all... a good weekend.

Hot sauces has been one of those things that I've tried thousands of... purchased or perused... but never really thought to make one from scratch.  A couple weeks ago I made some Homemade Potato Chips and wanted something to dip them in that wasn't your normal potato chip-type dip.

Now I know you're first thought was pretty much... "you're going to dip your potato chips into hot sauce?"  And I know, crazy, right?  But hey, it worked and it was pretty tasty!  Pretty good for my first try at hot sauce, and the recipe pretty much used up ingredients I had laying around the kitchen!  So score!

Easy prep on this too because you pretty much just place all the ingredients in a food processor or blender and pulse a few times until you get your desired consistency.

This was uniquely spicy and if anything, could pass as a "sloppy salsa".  It's not too pretty, but it was tasty.  And in the end, that's what really matters right?  So throw this on whatever!  Sandwiches, tacos, fish, steak... the possibilities are endless.  And as for pairing well with the potato chips?  It was unique, but highly satisfying!  Enjoy!

And hey guys!  If you have the time (please say you do!) head on over to Foodbuzz's Project Food Blog page and vote for my blog to become the "Next Food Blog Star!"  (the link is to the right --->) I greatly appreciate all of your comments and continued readership!
Posted by Peggy G. at 3:44 PM