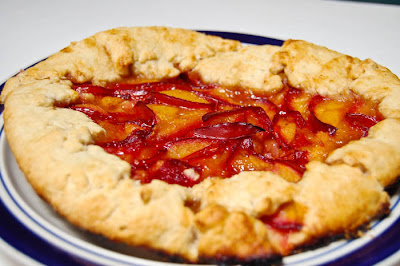 I think this might actually be my first "dessert" type post.  Well... a dessert that I haven't had to come up with on the fly for a Foodie Fight battle or what not.  I have this trend of either making main courses, or as of lately, appetizers and sides.  But when do desserts get to shine?  Well, honestly, I don't fancy myself to be a very great baker or pastry artist.  I mean, with the likes of the Brown Eyed Baker, Joe Pastry (one of Louisville's own! btw), and Monet over at Anecdotes and Apple Cores... it's kind of intimidating to post dessert recipes.

Another reason I think I stray away from posting dessert recipes is that I'm not one to stick to being precise.  Yeah, I have certain measurements depicted on my recipes, but that's just for formality reasons.  You know, I'm one of those cooks that doesn't stick to a recipe.  There's always room for improvisation.  With baking and desserts, I don't always think that's the case, and possibly why I fear them the most.

But that's also not to say that I don't make desserts at home.  I make plenty.  And Andy can attest to that.  Just this past weekend, I experimented and made a bacon and french toast ice cream.  Was it good?  Hell yes, it was good.  Some say there was too much bacon, and I might have to agree on that, but interesting and new nonetheless.  Will I post about it?  Probably not... unless you guys REALLY want me to start branching out into the dessert world.

But this is a blog of trial and error.  So I might just be easing myself into the dessert world, but just know that it will be slowly.  Who knows when the next dessert post will be... but we'll just have to determine that from the feedback of this one!

To make the dough, combine the flour, sugar, and salt in a medium bowl.  Add the butter and work into flour with fingertips until mixture starts to look like a coarse meal.  Add enough cold water to bind the dough together.

Form dough into a ball and flatten out.  Wrap in plastic wrap and refrigerate for at least 1 hour.

In a medium bowl, toss the plum slices with 4 tablespoons of the sugar, lemon juice, vanilla, and cinnamon.  Set aside.

Roll out the dough to your desired thickness and size.  Sprinkle with 1 tablespoon of the sugar.  In the center of dough, lightly sprinkle 1 tablespoon flour.

Mound the plum mixture in the center of the dough, and reserve any remaining juices.  Sprinkle the plums with the remaining tablespoon of sugar.  Fold border of dough up around the plums like a free-form tart.

Bake in the oven until golden brown for about 30 minutes.

Meanwhile, pour the reserved juices into a small saucepan and bring to a slow boil.  Reduce heat and simmer for about 3-4 minutes, or until mixture has thickened and slightly reduced.  Brush plums and outer edges of crostada with mixture, if desired.

Andy will say this is not a dessert.  He doesn't believe dessert should include fruit.  This is where we differ in our dessert palates.  Me, I'm MORE of a fruity dessert lover.  He, on the other hand, is a "dessert MUST have chocolate" snob.  But he ate this.  And he said it was quite good.  And would have been better with chocolate.  Go figure.

Enjoy the weekend guys!  I know I'll be studying for most of it, but I don't have to work, so that's worth looking forward to!
Posted by Peggy G. at 6:57 AM