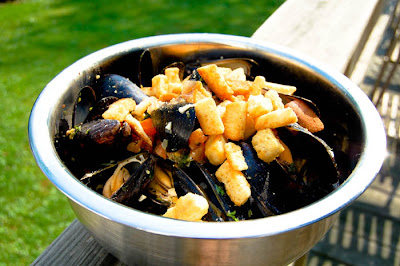 Well, if you voted for my muffins yesterday on Foodie Fights, then I greatly THANK YOU! Because I ended up coming out victorious! Booyah. And yes, I said "Booyah!" And if you think you're up for the challenge, I highly recommend signing up for a future battle! It's completely fun, and definitely lets your inner creative self come out!

On a side note, I was reading the other day that Seattle is banning Styrofoam in restaurants and grocery stores starting July 1st. This is a pretty green effort on Seattle's part. And as a response to this, apparently, some compostable meat trays have been developed made out of corn. What I found most shocking about all of this... developing these trays will prevent 6,000 tons of plastic and plastic-tainted waste from being sent to landfills. SIX THOUSAND TONS! Excuse my french, but that's a shit-ton of waste being saved there. Why have these things not been developed and mass-produced country-wide? Seriously... the mid-west and east coast need to get on this band wagon!

Anyway, my love of seafood continues with this easy and quick mussels recipe...

In a small bowl, combine the parsley, chives, and tarragon. Whisk in sour cream and both mustards. Stir until blended.

In a large dutch oven, melt the butter under high heat. Add garlic and thyme and stir for about 1 minute. Add mussels, tomatoes, and green onions. Slowly pour in the beer and add in sour cream mixture. Season with salt and pepper and mix well. Cover and steam for about 8-10 minutes, or until mussels open. (Discard any mussels that have not opened after 10 minutes, they're no good)

Serve mussels in a deep bowl and top with croutons. (As you can see, I went a little crouton crazy, but I like my croutons!) Dig on in, and just to warn you, it's going to be messy, but you'll enjoy the flavor too much to care!

This was really great. The broth was flavorful and not too heavy. The mussels were juicy and the added crunch of croutons was a nice bonus. Enjoy!
Posted by Peggy G. at 1:32 PM