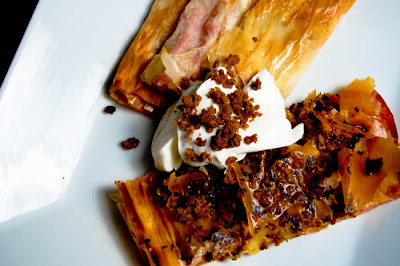 I've been a big proponent of phyllo dough lately. I mean, for the price you pay for the delicate pastry sheets, you might as well use them up, because they do give you a lot. So, thinking creatively, I rummaged through my brain to see what I could do with the leftover roll I had. Then I got to thinking, wouldn't it be awesome to have a chorizo and cheddar Hot Pocket. And so I decided to make a wrap of sorts, experimenting with different meat and cheese combinations... in the end, chorizo and cheddar definitely won out.

As you can see... these are more like making a sandwich than a technical recipe. You add in as much as you want and even add extra things not listed if you want also.

Start with 3 sheets of phyllo dough, maybe a foot long each. Place desired meat (in this case, chorizo, salami, or ham) in the center. Then top with desired cheese. Spread filling in middle section of sheets. Then, roll up into a tight wrap and fold edges underneath. Be sure to seal the wraps with a little bit of warm water also.

Alternatively, instead of rolling up the sheets. You can stack them and put the filling in between (kind of like a layered pizza - it should look like the right portion of the photo above). Make sure you have at least 2 sheets of phyllo for each layer though, this stuff is delicate.

Bake either method in the oven for about 5-10 minutes, where outside is crispy and flaky. Serve with sour cream and extra ground chorizo.

This is pretty simple. Definitely a great way to use up leftovers. You practically make it any way you want and the result is usually tasty. I was afraid this wasn't going to turn out because my first attempted phyllo concoction looked a little burnt. But after tasting it, it was just like a crispier crust and with the addition of the sour cream, perfecto. Enjoy!
Posted by Peggy G. at 7:57 AM