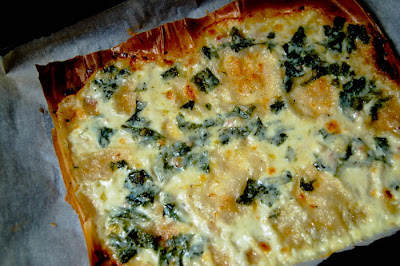 Alright, last Foodie Fights battle I ended up with 2nd place. This time I'm going for the win. Battle Dandelion Greens and Parmesan Cheese. Yeah, everybody knows what Parmesan is... but I had no clue (and would have continues to have no clue, if the guys over at Foodie Fights hadn't posted a picture), what in the heck Dandelion Green were or how I would even use them.

So I trekked on over to Whole Foods who aptly stock the lovely greens. I brought them home, and snagged a leave off of the bunch to have a raw taste... NOT what I expected. I had Googled them beforehand and learned that they were a bitter green, but I wasn't expecting the amount of bitterness that I did. Definitely not going a salad route, I thought.

So then I started brainstorming of things to do with the Parm and maybe that would lead me to do something with the greens. and then Eureka! I make a mean alfredo sauce. It may not be your conventional Italian mother's alfredo sauce, but it's pretty darn good.

So the alfredo idea was in place, and then it only seemed fitting that I end up with...

I needed to try to take the bitterness out of greens, so I first brought the chicken stock to a boil and added the greens to that to wilt them down. Let them simmer in the stock for a few minutes, maybe 3-5 at most. Drain and squeeze out most of the liquid. Set aside.

I figured fat would help cut down on the bitterness too, and it would end up adding a good flavor overall. In a small saucepan, brown the bacon pieces until most of the fat is rendered and bacon is starting to crisp up. Stir in garlic and saute for about 1-2 minutes. Add in dandelion greens and saute for another minute or two. Add heavy cream and bring to a boil, then reduce heat to a simmer.

Slowly add in shredded Parmesan cheese, stirring constantly and not adding more until cheese is melted within sauce. Let simmer for about 8-10 minutes to develop the flavor. Season with salt and pepper.

Preheat oven to 425 F. Line a small baking sheet with parchment paper and roll out Phyllo dough sheets, stacking the 3 sheets on top of eachother. You can use more sheets if you'd like, but I found 3 to be a perfect amount for a nice thin crisp crust.

Spoon about a ladle-full of the alfredo on Phyllo dough and make sure you get a good ratio of greens to sauce. Top with a few thin slices of Provolone cheese, if desired.

Bake in oven for about 7-10 minutes, depending on your oven. Cut the pizza into squares and serve! 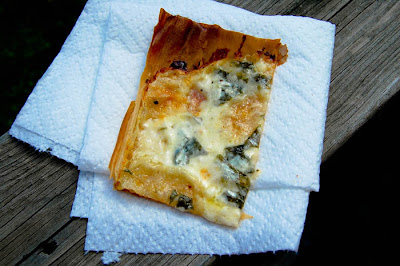 The result is a crisp, flaky, faux-pizza that has no bitterness from the greens at all. The alfredo is rich and delicious and this is perfect for a summer appetizer! Enjoy... and don't forget to vote on Tuesday at Foodie Fights!
Posted by Peggy G. at 7:21 AM