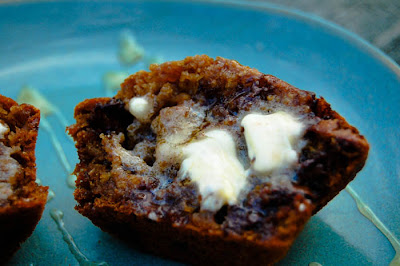 I'm at it again. Looking for the Gold. Yep, you guessed it... I'm in another Foodie Fights. I was sort of getting discouraged, past 2 battles, I've only managed to squeak by with second places. And I'm not sure if you know this about me, but I'm not a second place kind of gal. I like to be the winner. THE WINNER. This girl does not like to lose. So I had to dig deep, remain creative (although I almost settled for being mediocre, but kindly talked myself out of it), and persevere. 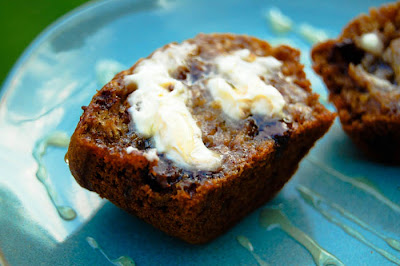 Normally, when I think of Ancho Chiles I immediately think Mexican. So I could have easily thrown together some tacos or enchiladas or something... but that would have been the easy way out.

So then I got to thinking about honey. Usually in a dessert or sweet little something. But with chiles? Sweet? Could be ballsy... but then again, could be genius! So I settled on a savory, but still sweet dessert... 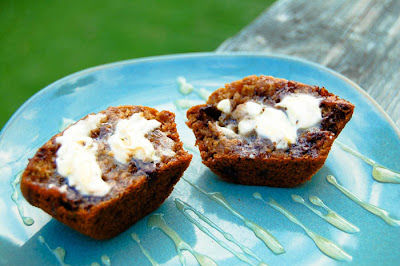 And this may be looked upon as sucking up a little, but Nick from Macheesmo had a Bran Muffin post a little while back, which intrigued me, so I figured I'd put a little spin on that baby and come up with a great muffin. #1, I've never made bran muffins before, and #2, I fall into that general public category of Bran Muffins? Cardboard right? But boy, was I wrong.

In a medium bowl, combine bran cereal, ancho water, and applesauce. Mix well and set aside. It should resemble a sort of mush, but trust me, there's tons of flavor there.

Sift together the flour, salt, cinnamon, brown sugar, and baking soda until well combined. Stir in the honey, milk, and eggs. Then mix in the bran/applesauce mixture. Fold in desired amount of chocolate chips and minced ancho chiles.

Grease a muffin tin and pour batter into muffin cups, filling about 2/3 of the way. Bake for about 15-20 minutes, or when toothpick comes out clean when placed in center of muffin. Let cool in muffin tin for about 10 minutes before serving.

Serve with a nice pat of butter and drizzle honey on top, if desired.

I was worried about these. I told Andy that I was going to make muffins for today's battle and he looked at me funny. He didn't quite believe it was going to work. But I figured, hey, if I can't go big, then I might as well not "fight" at all, right? Sometimes the risks in life, pay off. And in this case... after Andy took one bite, he immediately said this was great. Even my friend Nick, who happened to be over for dinner, said this was one of the best desserts he'd had in quite a while. So if you feel the need... head on over to Foodie Fights on Tuesday and rock your vote!
Posted by Peggy G. at 6:45 AM