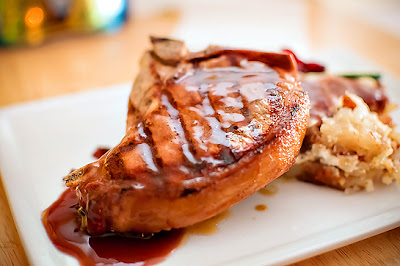 Our AC has been out since Friday.  Apparently the motor went out on it.  Not the best couple of days in the house.  Especially because when I step outside, it feels 20 degrees cooler out there than in our house!  However, hope is not lost because the repairman is due to be here shortly and we should be back in the cool air (hopefully) in no time!

I had my little sister and her boyfriend over for dinner and game night last night.  We sat on the porch (because it was too hot to eat inside lol) and had this lovely pork chop meal!  While I didn't win ANY of the games we played, (I should have won Clue - but someone didn't realize he had a card that I guessed!) we had a lot of fun and it was great to see them!

This meal is just a little bit fussy, but a lot of things can be made ahead so really, it's not that bad!

Melt the butter in a large cast iron skillet under medium high heat.  Add potato mixture and pack down with the back of a spoon into one even layer.  Cook until potatoes start to brown.

Flip the potatoes over and place the pan in the oven.  Cook until potatoes are crisp, flipping once in between (about 20 minutes per side).

Let cool slightly.  Cut the potatoes into two round halves.  On one side, spread the goat cheese.  Top with the chopped rosemary and chives.  Place the other potato half on top to form a "sandwich".

In a medium saucepan, combine the beef stock and port wine sauce.  Bring to a boil.  In a small bowl, make a slurry with the cornstarch and cold water.  Add to saucepan and cook until mixture starts to thicken.  Keep warm until service.  Before plating, mount sauce with butter for a shinier appearance and added flavor.  Season with salt and pepper, to taste.

To make cherry confit, heat the butter in a medium saute pan under medium high heat.  Add red onion and cook until softened, but not browned.  Add cherries.  Add brandy and flambe (carefully tip pan toward flame if you have a gas range, if not, just bring a match or long lighter close to pan until flame comes up).  Cook until flame runs out.  Stir in port wine and vinegar and cook until almost dry.  Keep warm until service.

Preheat a grill to medium high.  Rub pork chops with olive oil and season with salt and pepper, to taste.  Grill chops to desired doneness, about 4-5 minutes per side for a good medium.

Cut the potatoes into wedges and place in center of plate.  Lean pork chop against the potatoes and top with port wine sauce.  Sprinkle some cherries around plate.  Voila! 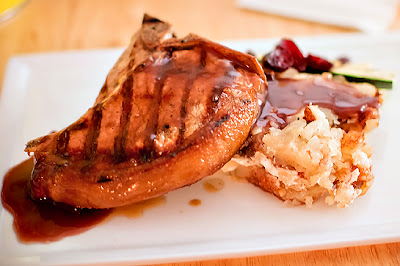