How was your weekend?  Ours was pretty relaxed, nothing new right?

We had our first Fantasy Football draft of the season (we're in 3 leagues!) yesterday and I ended up with a pretty solid team.  I'm just so happy that #1.  NFL Football is actually happening this year. & #2. That the season is actually here!  Sundays = Football in our house!  And I can't help but laugh when I think about when I first met Andy, he didn't like any sports whatsoever.  I guess we do rub off on eachother.

I usually don't post something I've made right away.  I usually wait a day or two most of the time.  I've just got tons of things in my Lightroom gallery that it's hard picking what to do next.  However, we had this for dinner last night, and it was so amazing that I couldn't wait to share it.  Seriously, if you like duck (it's probably my favorite protein) and want something special and elegant - this is it.  Trust me. 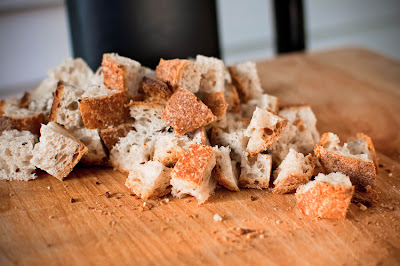 I'm so glad I decided to buy a whole duck instead of just the breasts.  It's a lot cheaper, plus I have the rest of the duck to use to make a confit (which is actually in the works as we speak! The house smells so good right now!).

Food & Wine recommends aging the breasts for 4 days - but I didn't have 4 days.  So I quickly aged the duck breasts for about 2 hours.  Just place the duck breasts in a glass dish, skin side up.  Season with salt and pepper and place in the fridge for at least 2 hours, and up to 7 days.

Preheat oven to 400 F.  Line up corn, asparagus, and potatoes on a baking sheet.  Drizzle with olive oil and season with salt and pepper.  Roast for about 30 minutes, or until potatoes are golden brown, stirring occasionally.  You'll want to flip around your corn every once in a while too.  Let vegetables cool slightly, then cut off kernels from corn cob.

While the vegetables are roasting, heat a large cast iron skillet under medium heat and add bacon.  Cook until bacon is crisp, about 5-7 minutes.  Remove with a slotted spoon and drain on paper towel-lined plate.

Add the bread cubes to the bacon fat (this was genius!) and coat well.  Transfer skillet to the oven (on a rack underneath the vegetables) and bake until crisp, about 13-15 minutes.  Season croutons with salt and pepper.

Heat a large skillet under medium high heat.  Add duck breasts, skin side down, and cook until skin is golden and crisp - about 12-14 minutes.  Turn duck over and cook until medium-rare (if you're not comfortable with that, cook it a little longer) about 4-6 minutes.

Transfer duck to a cutting board and let rest for 5 minutes.  Slice thinly.

While the duck is resting, you can prepare your panzanella.  In a large bowl, combine the corn, potatoes, asparagus, bacon, croutons, tomatoes, scallions, and oregano.  Toss well.

In a small bowl, combine the red wine vinegar and 1/4 cup olive oil.  Season dressing with salt and pepper and drizzle over vegetables and croutons in bowl.  Toss to mix well.

Divide the panzanella among plates and top with slices of duck. 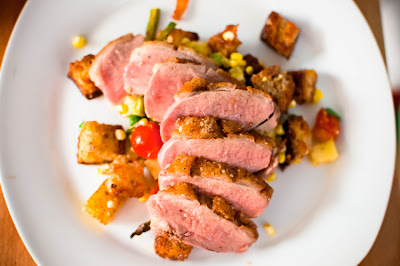 Seriously, this was absolutely amazing.  I think it took Andy all of 5 minutes to clear his plate.  He said it was so good he couldn't help but keep shoving it in his mouth.  Me, I took it slow.  So I could enjoy every bite because it was really the perfect meal!