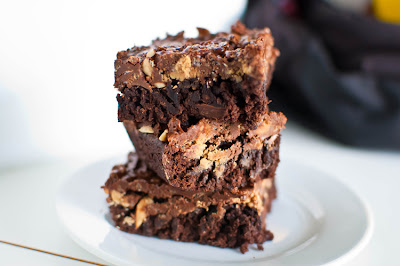 What is Secret Recipe Club?  Well, it's the brainchild of Amanda from Amanda's Cookin'.  You are assigned a "secret" blog to cook one dish from and post on the given reveal date.

I love how the group has just grown so much since I first joined!  This will be my third SRC post and definitely not my last!  I just love discovering new blogs to ogle over!

This month, I received Edesia's Notebook.  This blog was new to me, but as soon as I was assigned this blog, I knew I would be a regular!  With things like Slow Cooker Garlic Soy Drumsticks to Ginger Scallion Rice, it was hard to choose!  It all looks delicious!

Andy was being especially good, so I thought I'd treat him to a special treat.  I picked Edesia's Peanut Butter Crunch Brownies a.k.a. Better Than Crack Brownies.  I mean, chocolate & Reese Cups?  Two of Andy's favorite things combined into one stellar brownie.  And it couldn't be easier to put together either!  Let's get to it! 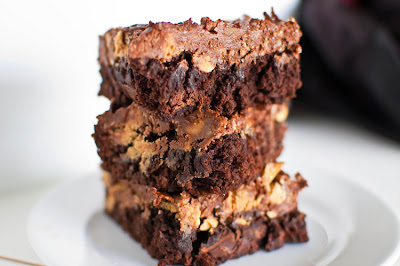 In a microwave safe dish, melt the chocolate chips, butter, and peanut butter for about 45 seconds. Stir until smooth.  Then stir in the Rice Krispies. 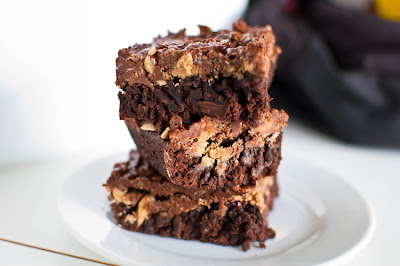 Pour the Rice Krispies mixture over the brownies and let cool. Refrigerate for at least two hours until serving.  This was definitely the hardest part because I totally wanted to dig straight into them!  But trust me, well worth the wait!

Okay, these were seriously one of the best brownies ever.  I even tried to take some leftovers to work and Andy practically held them hostage.  So yeah, they were THAT good.

I had a friend over for dinner that night and gave him a couple to take home for his roommates - Andy didn't see me do this and when he noticed a couple brownie slices were missing, he definitely interrogated me until I confessed.  I didn't know he was keeping track - duly noted for next time.

I got a text later on in the week that read "umm, (roommate's name) says that brownie was better than crack".  I don't want to know how they know this, but hey - I take it as a compliment.

So yeah, trust me - you want to make yourself a batch of these babies.  But I can't promise that you'll want to share them.  Ask Andy.