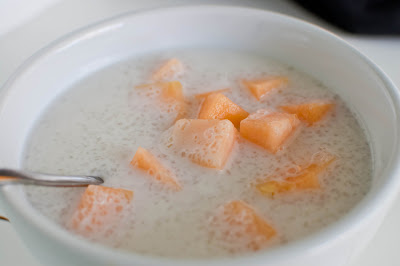 I've had a clumsy start to the week.  I'm not even usually a clumsy person, but this week, it's like accident after accident seems to be happening!

Sunday, while making dinner, I made the stupidest mistake ever.  I had cooked some salmon in the oven (in an oven-proof skillet).  After removing the skillet from the oven, getting side-tracked into a conversation of some sort with Andy, I go to grab the skillet.  Yeah, I think I may have yelled out some expletives with that one.  A quick lathering of aloe did the trick, and my hand seems to be just fine - so no worries!

And then yesterday, I was being extra productive and tried to tackle the cleaning of my pantry.  I bumped into a shelf and knocked over a jar of tomato sauce (which happened to be $8!).  So yeah, jar broke, tomato sauce everywhere.

Just not my week, I tell ya.

So times like these, simple things make me happy.  Like this tapioca, cantaloupe, and coconut milk dessert.  It's very reminiscent of something my mom used to make when I was a kid.  I'm pretty sure she put sweet potatoes and bananas in hers, but when I asked her how she made it - she couldn't even remember that it was something she made.  But I swear she made something like this!

I was on a search for tapioca pearls a couple weeks ago, and being too lazy to drive to the other side of the city to an Asian Market, I settled on granules from Whole Foods - there was an empty spot where the pearls were that said "discontinued item".  I guess tapioca isn't that popular anymore! 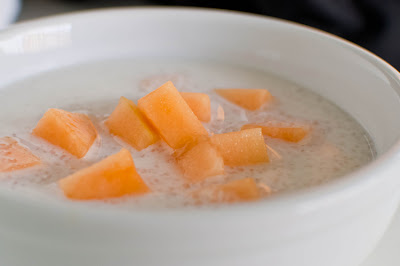 In a medium saucepan, bring the water and sugar to a boil.  Once boiling, turn the heat down to low and stir in the whole milk.  Return mixture to a boil, then turn off the heat.  Stir in the coconut milk.  Let mixture cool to room temperature and refrigerate for at least 2 hours.

Cook the tapioca according to the package directions and then drain.  Stir tapioca into coconut milk mixture.  Add in chopped cantaloupe. 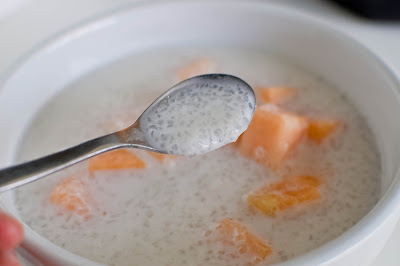 When I was a kid, I remember this being a little bit thicker, but this version was more like a soup.  I actually liked it this way.  It was the perfect treat to sit on the back porch and read a book with.  I even brought some into work for some co-workers to try and they said it reminded them of pina coladas!  If only I lived near a beach! 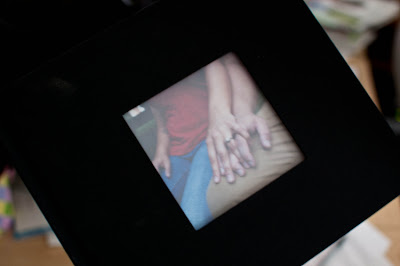 Oh, and one other note.  Through the Foodbuzz Tastemaker's Program, I was able to make a Kodak Photo Book.  I got the e-mail right after we received our engagement pictures back and thought it would be the perfect way to get them printed!  I made a little "story book" of Andy and I! 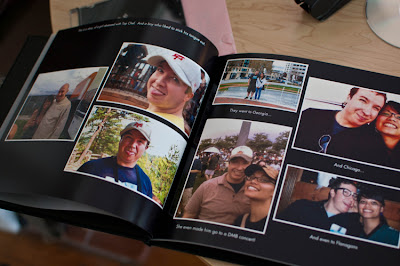 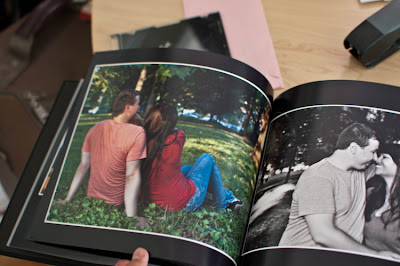 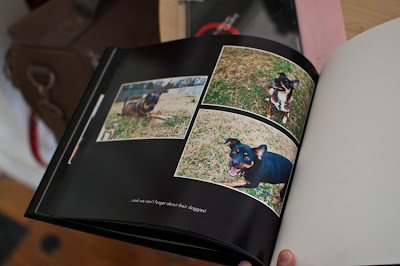 Making the photobook couldn't have been easier!  Most of the photos I uploaded from Facebook, and then the engagement pictures I just uploaded straight from my computer!  It didn't take long either.

And the process is pretty self-explanatory, as well.  The Kodak website pretty much walks you through the whole thing.  It even lets you know if the picture you chose isn't of good enough resolution for print - nothing more frustrating than seeing a picture that looks perfect on a computer screen, but then crappy when you print it off!

So as my readers, Kodak is offering you 40% off the cost of a Medium Hard Cover Or Large Photobook.  Just check out the website here!

Have a great rest of your day guys!

*As part of the Foodbuzz Tastemaker's Program, I was given the opportunity to make a free Kodak Photobook.
Posted by Peggy G. at 9:40 AM