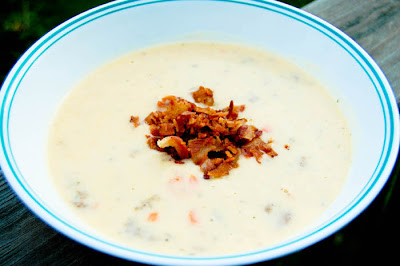 First of all... I just want to say, I am so glad to be off work today. It was an absolute madhouse. From crazy customers, to irate individuals, and just a damn busy day... it feels so nice to pop open a Stella and write this blog.

We've all seen those "munchie-themed" movies/tv shows like Half-Baked, or Harold & Kumar, or practically any Dave Chappelle skit, but I was reading an article from MercuryNews.com about a little bakery/shop that provides a "gourmet" look at munchies. Yeah, the menu looked pretty tasty, with things like cheddar jalapeno muffins, Ghiradelli triple-chocolate lavender brownies, pissaliere, and a roasted sun-dried tomato soup. So what's so different about this place? Well, it uses something called "cannabutter"... which is basically melted butter, water, and crushed marijuana mixed together, then allowed to harden. Yeah... a sophisticated pot head's dream right? Well... turns out, even though they've legalized medical marijuana out in California (where the shop is located), some laws haven't been made to allow this sort of thing to keep going on, so the shop is going to have to close down by next Wednesday.

Minus the whole marijuana theme, the actual menu sounds pretty tasty, even without using the illegal goods. Might have to try whipping up my next batch of brownies with a hint of lavender.

Anyway... this potato soup is probably one of the best I've ever had. It's perfectly cheesy, loaded with potatoes, and has that perfect hint of jalapeno and bacon that just set it off!

In a medium bowl, toss the shredded cheese with the flour and set aside.

Bring a large pot of water to a boil and add potatoes. Salt well and simmer until soft, about 8-10 minutes (Yukon Golds are pretty soft for a potato to begin with so it shouldn't take long). Drain pot to remove water and return potatoes.

In a large skillet, melt butter under medium high heat. Add the carrots, onion, salt and pepper, garlic powder, and onion powder. Cook until vegetables have started to soften, about 5 minutes or so. Add the ground beef and cook until browned. Strain any fat, if needed. Pour mixture in pot with potatoes.

Add in chicken broth, beer, and parsley and bring heat to about medium. Simmer for about 5 minutes. Add milk and heavy cream. Simmer for another 3-5 minutes, and be careful not to let soup come to a boil. Turn off the heat and stir in cheese until it is all melted. Stir in sour cream and jalapeno juice. Season with salt and pepper, if needed.

Ladle soup into deep bowls and top with chopped jalapenos and chopped bacon.

Like I said, this is one of THE best potato soups I've ever had. I know a lady named Rhonda that makes a hell of a potato soup also, so I can't say it tops hers, but it gives it some stiff competition. Enjoy!
Posted by Peggy G. at 1:48 PM