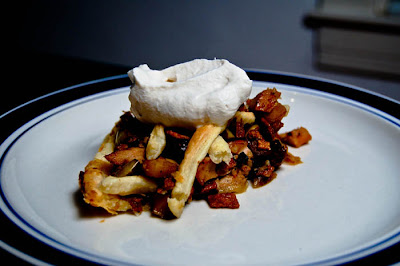 Well, my vacation is finally over. As I dread going back to work today, I can say that although it went super fast, we did a lot of things and had a lot of fun. The weekend was especially jam-packed. We went to King's Island on Saturday, from which my sun-burnt back and face is still recovering. And then we saw the Avett Brothers, Zac Brown Band (whom I don't quite care for), and Dave Matthews Band at HullabaLOU at Churchill Downs on Sunday. So all in all, a good vacation.

And despite the busy weekend, I still had time to compete in this week's Foodie Fights, battle Apple and Beer. You'd think that combining the two would be an easy task. Yeah I could just make an apple pie, or cobbler, or something like that. But no, my brain had to think all wacky and inventive. Yes, I like pies with apples, so I started from there. But what about the beer? All I could think about was Beer Can Chicken... so what does my crazy ass do? I make a pseudo-beer can chicken apple pie with New Castle whip cream.

For the marinade, in a small bowl, combine the apple, vinegar, and lemon juice. Puree with a hand blender until you reach a smooth, yet slightly chunky consistency. Add in brown sugar, soy sauce, sesame oil, and beer. Mix well.

Season drumsticks generously with salt and set in shallow dish. Pour marinade mixture over top, cover, and let marinate in refrigerator for at least 1 hour.

Meanwhile, you can make your pastry dough. I used a simple cream cheese pastry recipe. Whisk together the flour and salt in a small bowl. In a large bowl, beat the butter and cream cheese until fluffy. Slowly add in flour mixture until dough forms. Form into a flat circle and keep chilled in fridge until ready to use.

Heat a grill to medium high heat and grill drumsticks until cooked throughout, about 15-20 minutes. Let chicken cool slightly and shred. Set aside.

To prepare the filling, heat 1 tablespoon butter in a large skillet. Add diced apples and brown sugar. Stir until brown sugar is dissolved and slowly add in beer. 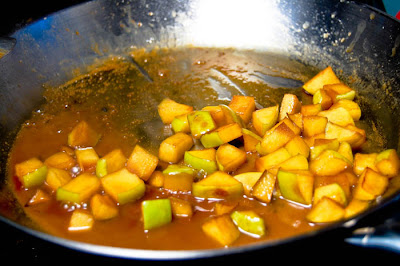 Mix in chicken and stir until liquid is almost evaporated. Set mixture aside. 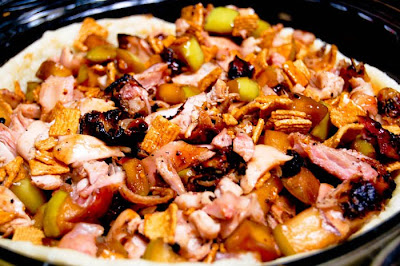 Roll out your pastry dough on a floured surface. Place carefully in pie pan and trim edges accordingly. You can use the scraps to do sort of a "lazy lattice" like I did. Sprinkle shell with brown sugar and add a few slats of unsalted butter, if desired. Bake just the shell for about 10-15 minutes, or until it's a nice golden brown. Add in the filling and top with lattice, if desired, and bake for another 30 minutes. 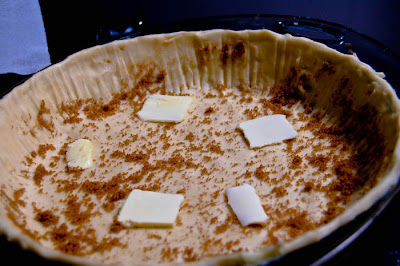 While the pie is baking, you can make your New Castle whip cream. (these mini-kegs are popping up all over the place for all sorts of beers, beer companies should have thought about this/marketed them more a long time ago!) 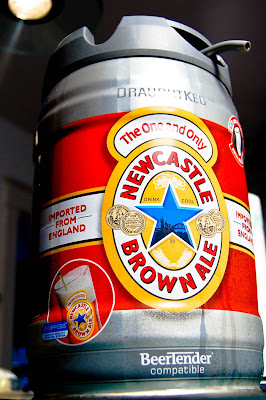 Just combine 1 cup heavy cream, 1/4 cup brown sugar, 1/4 cup New Castle beer, and 1 teaspoon vanilla in a small bowl. Use whisk attachment on your hand blender and whip until peaks form. Store in fridge until ready to use. 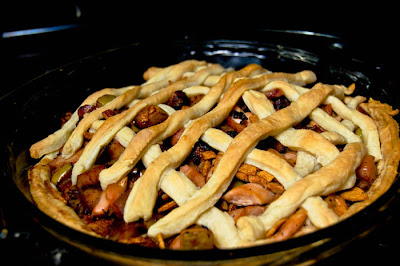 Let pie cool for about 10 minutes before slicing and top with a dollop of the whip cream!

I must say, this was an odd one for me to compete in. You can definitely sense the flavors of the apple and beer throughout the pie. It's a different flavor, and maybe with a different protein (say... pork, because pork goes really well with apples) it could have been a knockout with anyone. But the chicken and apples, I think is more of an acquired taste. The New Castle whip cream was just off the chain, and I think I'll be eating out of that bowl for a long time. Good luck to the rest of my competitors and if you see fit, feel free to vote on Tuesday at Foodie Fights!
Posted by Peggy G. at 7:56 AM