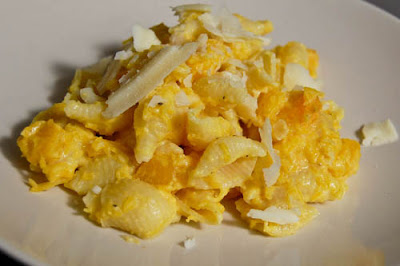 I know what you're thinking. Pumpkin Pasta? That's weird! Yes... I agree. Very weird. So weird, I had to give it a go to see what it was like. Result? Eh... so so. It wasn't bad, but it wasn't great either. Feeling adventurous? Give it a go and see for yourself!

It's a basic recipe for a basic cream sauce. Flavor wise? Turned out, well... basic.

Bring a large pot of water to a boil. Add pasta and cook until al dente.

While waiting for the pasta, get a large skillet and heat up the oil under medium heat. Add in onion and cook until translucent and soft, about 3-5 minutes.

Add the cubed pumpkin and cook until softened, about 20 minutes. Periodically, throughout, try pressing down on the pumpkin to sort of mush it down. Season with salt and pepper.

This is as far as the original recipe goes. Me, I wasn't satisfied with that. It just tasted kind of blah. So I had to spruce it up.

To the softened pumpkin and onion, add 1/2 cup cream and about 1/4-1/2 cup parmesan cheese
(depending on how thick or cheesy you want it). Let simmer until slightly thickened, shouldn't be too long, no longer than 5 minutes.

Drain the pasta and stir in with cream sauce. Salt and pepper to taste and serve!

Like I said... this wasn't anything spectacular. It was just weird. I don't know if pumpkin is meant for pasta. Not for me anyway. Enjoy!
Posted by Peggy G. at 6:16 AM