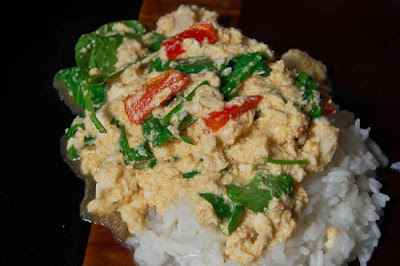 I'm not gonna lie, this was just okay. Kind of looks like a bunch of mush. Haven't really had anything good come about lately. Kind of depressing, but I guess I'll get back in the game soon... hopefully.


Ingredients:
Adapted from The Taste of Oregon's blog

In a large bowl, combine coconut milk, curry paste, fish sauce, and egg. Beat the mixture until the curry paste is dissolved and well incorporated.

Add flounder pieces and let marinate in fridge for about an hour.

In a large skillet, heat up oil under medium to high heat. Add the dried chiles and cook until browned, about 1-2 minutes. Add the bell pepper and saute until soft, about 4-5 minutes.

Add fish/coconut milk mixture to pan and bring to a boil. Simmer for about 15-20 minutes, when fish is white and mixture is heated through. Add in spinach and stir until wilted. Season with salt and pepper to taste. Serve with rice.

I don't really know how to describe this dish. It had flavors of a thai style curry, yes, but it just didn't have enough punch. The original dish was meant to be a custard-type deal steamed in a banana leaf boat, but I didn't feel like buying any banana leaves so I just heated the mixture up. I should have probably removed the egg since I wasn't planning on doing a custard. That was mistake number one. The curry may have been less chunky and more smooth that way. The rice I made was a little mushy too. Kind of made it runny. It was just sort of a plain jane dish and didn't get much depth of flavor. Oh well, try and try again I suppose.
Posted by Peggy G. at 8:11 AM