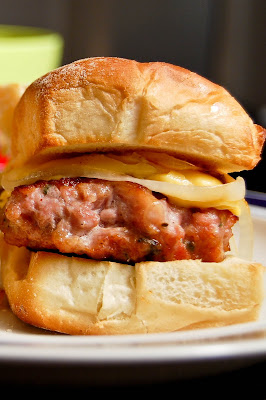 I love bratwursts. I love mini-cheeseburgers. So why not combine the two to make a bratwurst patty slider? Seems like a good idea in hind-sight, but I don't necessarily think I executed it very well. Andy still ate them, but I think it was just missing something. Recipe was adapted from the Bon Appetit Oct 2009 issue recipe for Homemade Bratwurst Bites.

I think my first wrong turn in this recipe was using the bacon to replace pork fat in the original recipe. I think the bacon really overpowered the pork and made it taste like breakfast. Now breakfast isn't a bad taste, but it's not really the taste I personally wanted in a burger/slider. And I know that bacon IS pork fat, but I think using an uncured pork fat was what this recipe needed.

Freeze the bacon and the pork cubes in the freezer for about 30 minutes. It should be partially frozen. Then, in batches, place half the bacon and half the pork in your food processor and pulse until you get a good ground consistency. If you have a meat grinder, it would work as well, but I know most people have food processors that could do the same job.

When all done, place mixture in bowl and mix in sage, salt, mace, pepper, coriander, and sugar. Stir in about 1/4 cup of the beer. Cover mixture and refrigerate overnight.

Next day, form mixture into slider sized patties. Heat patties (I did about 6 at a time in a large frypan) under medium heat for about 5 minutes, until browned on the bottom. Then add remaining 1/2 cup of beer (you may need more beer than above if you want to continue this step, because there was enough of the mixture to make TONS of patties, or you could just brown both sides and still be fine). Cover with lid slightly ajar and cook until beer is almost all evaporated, maybe 10 minutes or so. Flip patties over and cook until brown on other side and cooked through, about 5 more minutes.

I used Hawaiian Sweet Bread Rolls for my buns (which I absolutely LOVE), and topped my burgers with swiss cheese, spicy brown mustard, and carmelized onions. Andy didn't want swiss, so he put Velveeta on his. Dress your sliders accordingly and enjoy!

Like I said, these weren't BAD, it just seemed like something was missing. Maybe you guys could play around with the recipe and find a way that works for you! Or who knows, maybe THIS way works. Enjoy!
Posted by Peggy G. at 7:17 AM