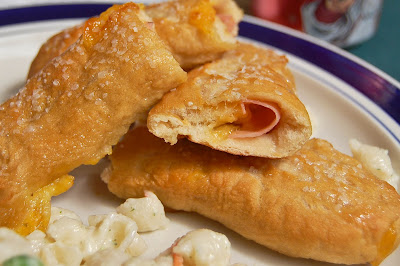 It seems that whenever I decide to stuff something, I use ham and cheese. I don't know what it is, but I think it's just a neutral flavor that almost everyone can tolerate I guess. Now, these pretzel rolls didn't photograph very well, and trust me, I tried to make them into pretzel shapes, but with the stuffing inside them, they were kinda fragile, so I just stuck with the log shape. But the taste was there. Tasted like a pretzel/ham and cheese sandwich. So, I think all in all it was a success. Recipe was inspired by these little mini guys over at Ezra Pound Cake's blog.
Ingredients:
1 packet active dry yeast
2 tablespoons plus 1 teaspoon dark brown sugar
1/2 cup warm water
1 cup warm milk
2 & 1/2 cups flour
1 pack of ham (use as much as you like in each roll, but I found about 2-3 slices in each worked well)
1/2 cup shredded cheddar cheese
6 cups water
4 teaspoons baking soda
1/2 stick unsalted butter, melted
kosher salt to top
In a fairly large bowl, combine yeast, 1 teaspoon brown sugar, and warm water. Stir together and let sit until started to become foamy, about 5 to 8 minutes. If you don't see any foam by 10 minutes, then start over. It means your yeast is bunk, and nobody likes bunk yeast.
Then in a small bowl, stir together remaining brown sugar and milk. Mix until sugar is dissolved.
Add flour and milk mixture to yeast mixture. Stir with a wooden spoon until a dough starts to form.
Gently knead dough into a smooth ball on a floured surface, Then place in clean bowl, cover with plastic wrap, and let rise at room temperature for about 2 hours. I actually let this sit for about 6 to 8 hours, and it kinda resembled the starter of a sourdough or something (although I'm not for certain because I've never made sourdough, but I've seen pictures, so close enough), but either way, I think it should be fine. Mine turned out fine, so it's fine, right? Right.
Preheat oven to 400 degrees and line a baking sheet with parchment paper.
Cut the dough into 4 separate pieces, then divide those pieces in half. Roll out each piece to desired length and flatten with rolling pin. Place desired amount of ham and cheese on each rolled out piece of dough. Then, using warm water to seal the edges, press each roll closed. When done with each roll, let sit for about 30 minutes at room temperature. And don't worry, the dough will rise ever so slightly during this process, but it's okay.
Bring water to a boil in a large pot. Add baking soda and stir. This was kind of a cool effect because it sizzled as I put it in. I know, kinda dorky that I'm fascinated with that, but it's science in action. I could get into the reaction of it all, but I'm sure I would just bore you all, so you can just Google it if you're interested.
Add each pretzel roll in, 1 at a time, and soak until slightly puffed up, about 20 seconds. Make sure you turn them at least once during that time. Then place on baking sheet with parchment paper.
Bake the rolls until golden brown, about 20 minutes. Keep an eye on them, everybody's oven is a little different.
When done, brush on melted butter and sprinkle with kosher salt. Serve with beer cheese (Andy's concoction wasn't too bad, but it's nothing like beer cheese from Sportstime) or your favorite pretzel dipping sauces.
These were pretty scrumptious. Definitely authentically tasted like pretzels. I'm not much of a baker, so I didn't expect much out of these, but it was different, genuine, and pretty tasty. Job well done, I'd say. Enjoy!
Posted by Peggy G. at 3:17 PM