Before anything, let me first say, that I am super stoked about being chosen to participate in this week's Foodie Fights: Battle Eggplant/Wine. This is definitely a tough one because I've only really used eggplant a few times in my culinary adventures, but with a little research I think I might be on to something. And the competition is fierce, kinda makes me feel like a little fish in a VERY huge and advanced pond. But more updates on that later...

I was checking out Food In My Beard's blog the other day and there was a recipe for flank steak enchiladas that I just had no reason not to try. For 1, we never cook mexican/spanish food at home. 2. i love flank steak. 3. after making avacado salsa verde a few weeks back, i fell in love with the tomatillo. So I just couldn't pass it up. For complete recipe check out the blog, there's always something delicious and entertaining there.

First things first, preheat oven to 450 degrees and roast 1lb cored tomatillos, 3 halved and seeded jalapenos (i didn't seed them all the way, because i like a little punch), and 2 halves of an onion. Drizzle with some olive oil and salt, then roast until they're a little brown on the edges, I think it took maybe 10-15 minutes. 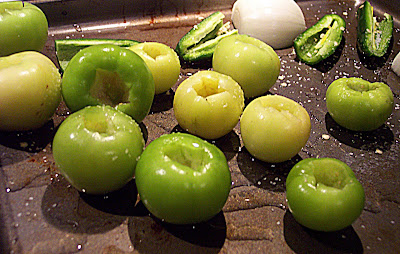 After that, I let them cool for a little bit and then pulsed all the veggies in the blender. Depending on how you like it, you can make it chunky or smooth, but that's up to you. Add some garlic and cilantro and whatever else you might have laying around that sounds good. I was going to add some cream cheese, but forgot, so it never happened. But it turned out like this... 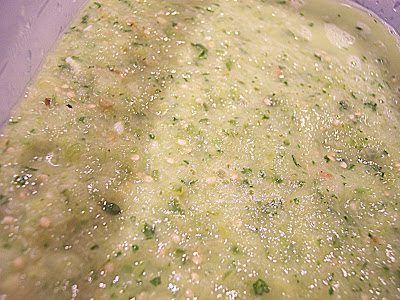 Had a little kick to it, that's for sure!

And instead of using 8 New Mexico dried chiles, I used about 4 because I had them on hand and didn't feel like buying more at the store. I then soaked those in about 2 &1/2 cups chicken stock and 2 & 1/2 cups water mixture under medium to high heat. I let them soak for maybe 20-25 minutes.

Next step was to blend the liquid and peppers in a blender. Since hot liquids in a blender don't really go together well, I let the mixture sit out for a little bit to cool. (an immersion blender could have solved this problem, but that's on my christmas list) Then, I put the chiles in first and blended those up first, added the slightly warm cooking liquid and just pulsed so it wouldn't all blow up. Worked well and had a minimal mess to clean up. 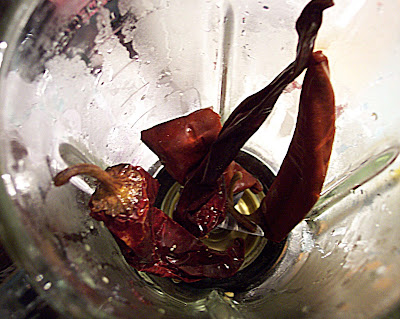 Set that mixture aside and get the flank steak out. Sear on both sides, I did mine for about 3 minutes each side, then set aside on cutting board/plate.

Chop up some onion and a few more jalapenos (once again, i left some seeds in) and cook in a pot for about 10 minutes. Add some garlic and cook for a couple minutes longer. Then bring back the pepper juice from the blender and mix in to pot. Add the flank steak. I grated a couple cloves in, pinch of cinnamon, tablespoon of cumin, and a shake or two of cayenne pepper. Then I covered pot and let sit on stove on low for about an hour and a half. About 45 minutes into it, add some diced potatoes.

I had some masa harina laying around and also made homemade tortillas just like Dan. Honestly, I've only just used it in tiny amounts to thicken things up - sauces, soups, etc. Never used it for it's actual intended purpose, to make tortillas. But it was really pretty easy though, just add water, basically. My tortillas didn't turn out quite as circular and perfect as Dan's did, but it was my first time and I was a tad bit clumsy. The authenticity and effort was there though.

Back to the steak and pepper mixture, take steak out with tongs and let sit on cutting board/plate a few minutes to cool. Then shred. I got tired of trying to shred thinly, so I ended up with half shred, 1/4 chunks, and 1/4 strips. Made for a good mix. Return shredded/chunked/stripped steak back to liquid and stir.

Put oven on broil. Fill tortillas with steak/potato mixture and fold in and place tortillas, crease side down in baking pan. I put shredded cheese in the tortilla first, then placed steak in. Add cheese on top of tortillas along with tomatillo sauce. Can put more cheese on if you wish. Place in oven and broil for about 5 minutes, until cheese is melted, and enjoy! 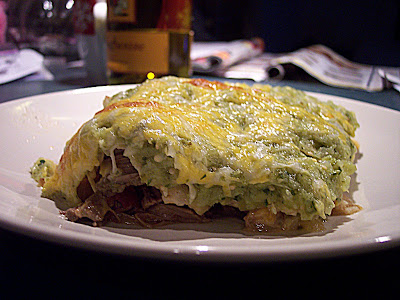 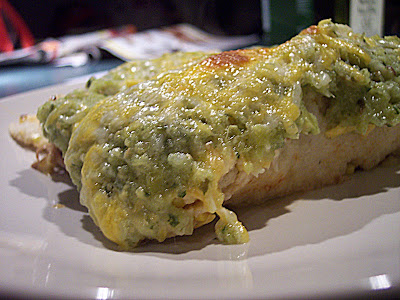 Everything was so tasty and great, thanks Dan for the idea!
Posted by Peggy G. at 10:47 AM