So this is the first post. So I figured I'd start out with something light and refreshing. I posted on my Facebook status the other day that I was in the mood to make chicken soup. I got tons of responses asking me if I was sick. Why does wanting to make chicken soup have to mean you feel sick or ill? Hell, I just wanted it because it sounded good. 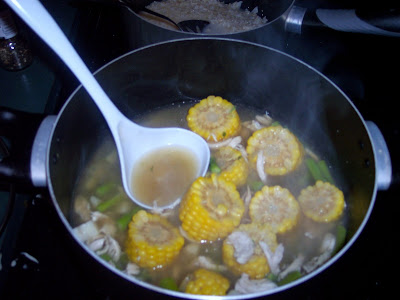 Well let's start out with what you need:

And On To The Action:

Personally, I like to get everything ready so I can just throw it all in and use it when it's called for. I Used to just prep as I went along, but I soon found out that it was a lot quicker to do the latter.

Anywho, put about 2/3 cups of the rice in a saucepan and put another water in to cover the rice. Bring to a boil, turn down the heat, cover the rice, and let it go for about 30 minutes or so, or until it tickles your fancy. When it's done, let it chill out without any heat for about 10 minutes, then salt it to your liking and let it be until it's needed.

Now for the magic, in a big pot, throw in the chicken breast(s) (the actual recipe calls for 1 skinless bone-in chicken breast, but I used 2 skinless boneless breasts instead because I had them on hand, you can do whatever), about 1/2 cup thinly sliced scallions (or green onions, whatever you wanna call 'em), 2 smashed cloves of garlic, 2 shucked and sliced ears of corn, 1/2 teaspoon of cumin, and some cilantro (actual recipe called for 1/2 cup, but Andy is sensitive to cilantro, sensitive meaning he's not too big of a fan, so I used about 1/4 cup to tone it down), and 8 cups of chicken broth (I took the easy way out and threw in 8 cups of water with 8 boullion cubes). Salt and pepper as you like and let boil, then simmer down low for about 12 minutes, or until your chicken no longer makes a peep. Take the chicken out of the pot and let rest until slightly cool, then shred it up. I did both thick and thin chunks, because I really like hearty pieces of chicken in my soup.

Then strain out the solids from the broth and discard everything except the corn (unless you don't like corn, you can throw it out, but why waste perfectly delicious corn, right?). Return the corn to the broth and bring that sucker to a boil again. Add about 1/2 lb. of cubed potatoes (I used red and peeled them, you can leave skin on if you like), and cook until just tender, 8 minutes. Then add 1/2 lb. chopped (1-inch thick) asparagus and heat for about 5 more minutes. Add chicken to pot, salt and pepper it up, and voila! You're done. 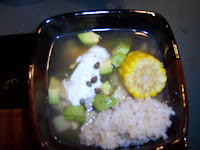 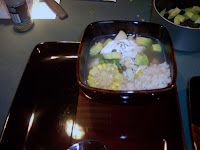 I "churched" it up a little and ladled the soup into the bowls, garnished the soup with some fresh cubed avocado, a spoon full of fat-free plain yogurt, a few capers (they add a punch that you don't expect), and a heaping spoonful of the brown rice.

And since soup clearly wasn't enough for Andy, his contribution was the grilled cheese... 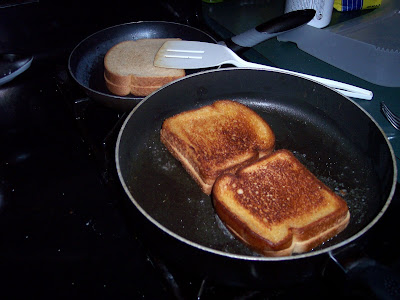 ... which I must say, was a good addition. There's nothing like dipping grilled cheese in soup =)
Posted by Peggy G. at 12:31 PM