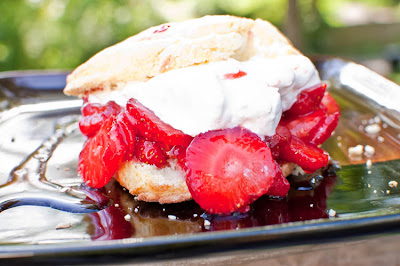 Well, mine was... lucky!  I went to the Kentucky Oaks on Friday and ended up winning around $40.  My strategy?  Betting on food-related horses!  Worked on 2 out of the 3 races that I bet on.  Besides a sun-burnt face, we had a pretty good time!  We went to a Derby party on Saturday (of which I brought Derby Pie fudge - which was a hit! - recipe soon to come) and just got to see some friends we haven't seen in a while.   We did a Kentucky Derby pool and I won that too!  Another $45 in my pocket!  So needless to say, I'm feelin' like a lucky girl, right now!

Anyway, let's talk Shortcake.  Growing up, my family's version of a Strawberry Shortcake was cutting up some strawberries and putting them in one of those bowl-shaped Angel Food Cake things they sell at the grocery and topping it with some Cool Whip.  You guys know what I'm talking about right?

I mean, don't get me wrong, it was good, and one of my favorite treats as a kid.  But looking at one of those packages of Angel Food Cake "things" (I say things because I haven't the slightest idea what they're actually called - if you do, feel free to let me know!) now, I see that it's just loaded with sugar and ingredients I can't even pretend that I know how to pronounce!  I never knew what a proper strawberry shortcake was like.  You know... with some actual shortcake (or as I like to think of it - a sweetened biscuit) 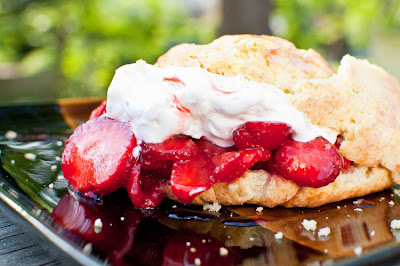 1 cup Cool Whip (or you could make your own - but I gotta keep some things from childhood, right?)
2 tablespoons dark brown sugar

In a small bowl, combine sliced strawberries and 1 tablespoon of sugar.  Let sit for about 15 to 20 minutes to release juices.

In a medium bowl, sift together the flour, baking powder, sugar, salt, and vanilla bean.  Cut in butter until the mixture resembles a coarse meal.

In a small bowl, combine the egg and milk.  Add to flour mixture and stir until mixture comes together.

Knead dough a couple of times, adding more flour if mixture is too wet.

Roll out dough to 3/4 inch thickness and cut into 4 equal squares.  Place on a greased baking sheet.  Brush tops of biscuits with milk and sprinkle with sugar.

Bake for 10-12 minutes, or until biscuits are golden brown and cooked through.

Cool to room temperature and cut each biscuit in half.  Place a layer of strawberries on bottom half of biscuit and top with Cool Whip.  Place top half of biscuit atop of Cool Whip and try to restrain yourself from gobbling up the whole thing in less than a minute! 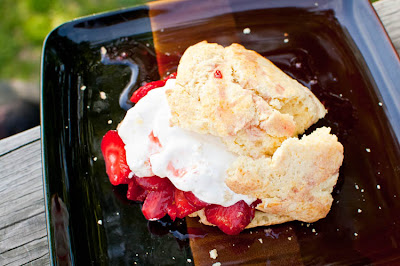 This is such a simple and fulfilling dessert that I wish I just had an overabundance of strawberries so I could eat it all spring/summer long!  I have a feeling that I'll be doing this almost weekly =)

Have a great rest of your Monday guys!  The weather is nice 83F and sunny sunny sunny - so we're heading out to the back deck to grill some burgers!
Posted by Peggy G. at 2:27 PM