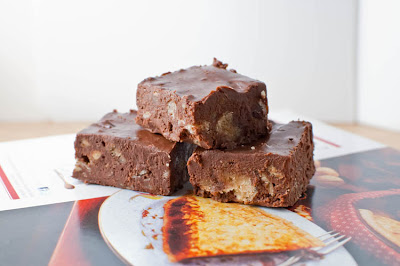 Okay, I'm a couple weeks late with this, but seriously - is there really not a good time for fudge?  Don't lie.  I know you guys like some chocolate.

Now, I don't know if Kern's Derby Pie is available to people outside of Kentucky, but I know that it's available year-round to us, and we are quite fortunate.  Because really, this is the quintessential pie to have during the horse-racing season!  Now, if you don't have this readily available to you, don't fret.  A quick Google search produces tons of Derby pie recipes that you could use. 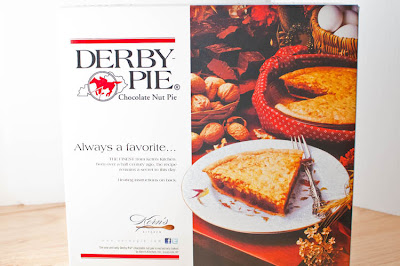 But if you Google search "Derby Pie Fudge", on the other hand - you're pickin's are slim!  Google has never heard of such a thing.  I told a co-worker this, and she immediately told me I needed to patent this.  Hehe, good idea, but really, I totally want to share this amazing goodness with all of you!  Trust me. The guests at the Derby party we brought this to were overjoyed with happiness once they saw this.  It wasn't like they were saying "hey, that fudge stuff is good"... they were saying things like "Oh my God, I don't even like fudge and I love this!"  No joke.

Oh, and don't forget to vote in this week's poll.  I'm feeling like something sweet once again...

So what are you waiting for?  Make this fudge pronto! (And if you're in the Louisville area on June 25th, I'll be selling this at a Great American Bake Sale site!  - I'll get you the info if you want it!).

In a medium saucepan, melt the butter and slowly add sugar.  Stir in evaporated milk and salt until sugar is dissolved.

Bring mixture to a boil and stir constantly for about 5 minutes, until mixture thickens.

Line a 1-inch tall pan (8x8) with parchment paper.  Pour in chocolate mixture and chill in the fridge until set, about 30 minutes. 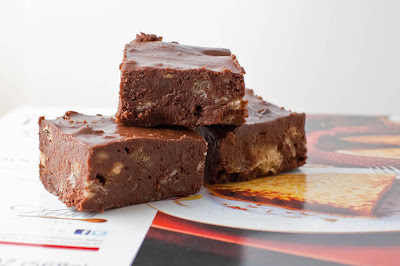 Cut fudge into squares and try to stop yourself from eating the whole pan.  It's going to be really hard!
Posted by Peggy G. at 7:24 AM