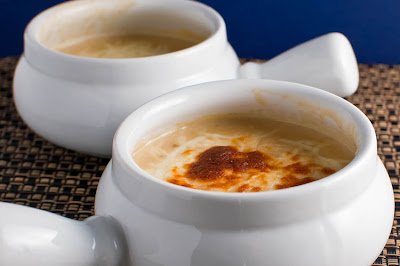 We were pretty relaxed on our end.  We watched the Superbowl last night with a couple of friends, but considering I didn't care for either team, I didn't quite pay attention very much.  And the commercials... I thought were a major disappointment this year.  I think I maybe laughed once, at a Doritos commercial.  But besides that, all were pretty lame.

And the half-time show.  Don't even get me started.  The best thing about it was the short appearance by Slash.  And then that was quickly ruined by Fergie's failed Axl Rose impersonation.  Seriously Fergie.  Major Fail.

But this is not a "complain about how much I disliked the Superbowl" blog.  It's a food blog.  And this soup, as weird as the combination of Potatoes & Endive sounds, it was a 'super' bowl of soup.  Yes, I made that corny joke, but seriously...  It was shear awesomeness in a bowl.  Unlike the actual Superbowl,  it does not disappoint. 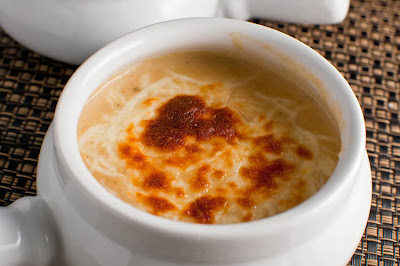 In a large dutch oven, melt 2 tablespoons of butter.  Add garlic and anchovies.
Once garlic starts to brown, add potatoes, raisins, bay leaf, pine nuts, and escarole. Cover with chicken stock, and season with salt and pepper. Simmer for 20 minutes.
Puree with immersion blender.  Slowly stir in heavy cream and cayenne pepper.  Then stir in pecorino and cheddar cheese until melted.  You can go ahead and serve the soup now as is, or you can take it to another level and place soup in oven-proof bowls, cover the top lightly with mozzarella cheese, and broil for a few minutes, until cheese is browned. 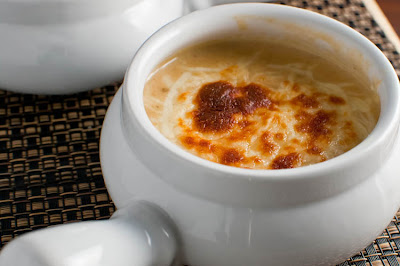 Now that's heaven in a bowl.  I loved all the different flavors in this soup.  They all melded perfectly together.  Seemingly random ingredients, came together for a flavor party.  And it was a tasty party, at that.  So if you're looking for something new and different, this soup is totally for you!  Enjoy guys!
Posted by Peggy G. at 3:53 PM